Water is a precious resource to be preserved. Water scarcity is a problem common to all continents.

Water scarcity is one of the most important problems that will be faced by many societies in the 21st century.

Although there is sufficient water on the planet to supply 7000 million people, it is not equally distributed, and the majority is squandered, polluted or managed unsustainably.

Hydrology experts assess water scarcity on the basis of the ratio between the population and the water available.

A region is considered to suffer from hydric stress when the annual quantity of water available is less than 1700 m3 per person.

The regions of the world suffering from water scarcity are shown in Figure 1.

A difference can be made between physical scarcity, when the water available is less than the demand, and economic scarcity, in which human, institutional and financial factors limit access to water despite sufficient water being available. 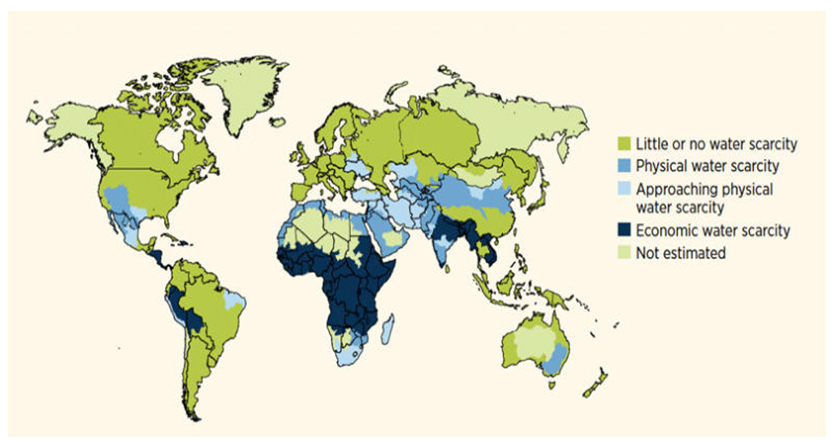 The management of water scarcity does not just involve major construction projects, such as interbasin transfers, to increase the availability of water resources; it is also essential to make better use of the water available without wasting or polluting it.

Water reuse, especially by industries that require large amounts, is essential in order to move towards a solution to this problem.

Thus, such industries must make rational use of their water and it is also essential that they treat their effluents so as not to contaminate public supplies, thereby wasting this precious resource.

A contaminated public supply reduces ecosystem biodiversity, decreases the quality and yield of agricultural crops that require water for irrigation, and even poses a health risk to the population.

Despite of their highly beneficial contribution to the environment, the waste recovery rate hardly ever reaches 100%.

That is why increasing efforts are being devoted today to total removal of wastes, though such a goal may seem utopian.

For this purpose, a waste management system known as zero liquid discharge (ZLD) is being championed by municipalities, governments and companies.

This approach arises from the fact that the volume of wastes and discharges that society generates today is increasing at excessive rates, which will make it difficult for nature to assimilate them, and thus the implementation of recycling measures is no longer sufficient.

Such also requires fundamental changes in the way materials are treated during production and consumption, aimed at recovery and reuse rather than disposal.

The ZLD concept is based on the use of techniques and processes that make it possible to reuse all polluted effluents and achieve three key targets:

The advantages of applying this philosophy in comparison with consuming as much water as necessary and discharging the effluents produced are numerous, although the following are perhaps the most important:

The implementation of a Zero Liquid Discharge (ZLD) system based on the zero waste concept involves the treatment of all liquid waste to such an extent that its quality allows it to be reintroduced into the process, hence minimizing final rejection.

The technologies used to concentrate and minimize the final effluent can be classified as either:

Specifically, vacuum evaporation is a technology that combines the ability to reduce discharges as far as possible with efficacy, robustness, and sustainability.

For this reason, such systems are practically indispensable when implementing a zero waste management system.

When the only waste should be a dry solid, vacuum evaporation is used in combination with a crystallizer, which crystallizes the residue from the evaporator.

Can I achieve zero liquid discharge?

Contact us and our team of experts in zero liquid discharge projects will get back to you with a fully customized proposal.

Industries that can benefit from it

The field of application of such management systems is as broad as the number of different activities that generate liquid effluents, with some minor limitations.

The activities in which a zero waste management system is particularly useful and advantageous are summarized in Figure 2. 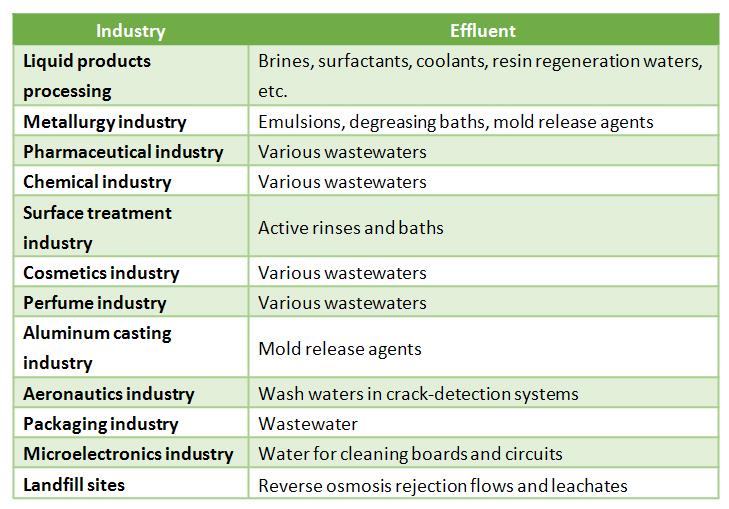 Figure 2. Industrial sectors in which a zero waste system is a key tool.

The virtuous circle representing the zero waste concept is shown in figure 3. Not all the processes shown are required in all cases.

And thermal processes (evaporation and crystallization) treat the rejection flows produced by the former processes, producing yet more water suitable for reuse and a final dry solid residue. 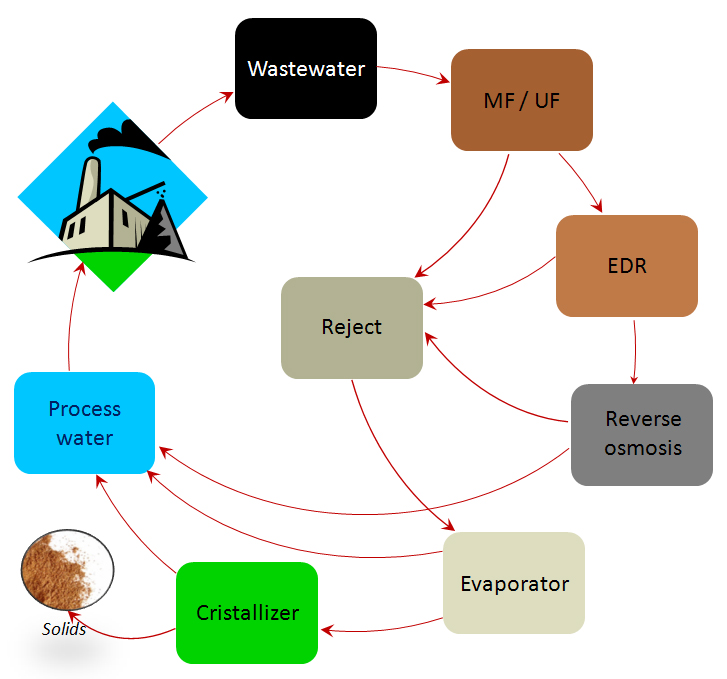 Some of the most important types of vacuum evaporators are the following:

Good quality water is normally obtained that can be reused in factory processes, in addition to a solid residue which is usually recoverable for internal / external marketing or fuel.

When it cannot be reused due to lack of value it can be transferred to a landfill.

To optimize the final results, crystallization systems use vacuum evaporators combined with some techniques for ZLD. Some of the processes that directly affect obtaining zero liquid discharge are:

Crystallization generates solid crystals that are separated from a solvent (normally water).

Industrial crystallization essentially consists of temporarily obtaining super saturation of a solute above equilibrium, which is the driving force of the process.

This can be achieved by re-concentrating the solute by evaporation of a solvent, cooling the solution or by action of the other chemical product that is added to the solution to decrease the solubility of the original solute, or even a combination of all three processes.

Crystallization also verifies different substantial stages that are distinguished from super saturation in addition to marking the kinetics of crystal formation and their size. Acting on temperature, agitation and time, it is possible to obtain very thin or thick crystals using this pattern.

Evaporative crystallizers work by use of a vacuum, evaporating water at a reduced temperature (35-80 ° C). Water is condensed and reused as distilled water. The evaporation vessel is configured with a heating jacket system, where the heating fluid (steam, hot water, thermal fluid) circulates. This special configuration achieves high concentrations in the chamber with the presence of solids without representing a problem for the process.

The outlet of the crystallizer normally requires the help of some final system for salt dehydration.

Spray drying consists of spraying a solution rich in dissolved solids, not in suspension, in a chamber that is kept warm by the action of flue gases from a burner or hot air (180 to 400 °C).

Upon contact with the temperature, the solvent evaporates instantaneously and the solid precipitates in the bottom of the chamber. A venturi system permits the extraction of the dried solid and it’s separated from water vapor and cold combustion gases (approx. 100 °C) that are emitted to the outside.

A filtering / washing process of the gases controls emissions into the atmosphere. Because spray drying is a process that consumes a large amount of energy (kwt / liter evaporated), it is preferably used after an evaporation process to re-concentrate the solute and decrease the volume of water to evaporate.

The solid obtained can be reused when possible or disposed in a controlled landfill.

The stabilization of liquids is highly recommended when liquid waste management is very costly or impossible and when crystallization or spray drying cannot be utilized for technical or investment reasons.

Some dehydrating polymers such as bentonite and sepiolite are commonly used. In some cases, other solid waste can be utilized (e.g., sewage sludge, ash, slag, etc.).

The mixing process is done in batches or in continuous operation in a unit named BLENDER, which consists of a drum where the feeding liquid or slurry and the solid product stabilizer arrive separately. They are mixed to form a homogeneous mass and are discharged through the front opening to a container.

After a few hours the mix cements. As time passes it loses practically all its humidity, becoming solidified and inert. This product can be taken to a landfill without problem because it will never again dissolve.

I need a zero liquid discharge treatment for my company

Contact us and our team of experts in zero liquid discharge projects will get back to you with a fully customized proposal.