The LIFE DIME® process has been conceived as a highly innovative solution for the recovery of hydrochloric acid (HCl) and other valuable materials that can be reused or turned into by-products from the effluents of spent metal pickling baths.

The spent liquor contains an iron concentration of at least 140-150 g/L and needs to be renewed by a fresh bath. For industries which also use hot galvanizing processes, as well as containing iron, the exhausted bath also contains high levels of zinc (around 25 g/L).

Most of the hydrochloric acid recovered from the spent pickling liquor via the LIFE DIME® process is reused in a new pickling process, which significantly reduces the purchase of this raw material.

The LIFE DIME® process does consume concentrated sulfuric acid. However, the cost of this acid is vastly compensated by the savings in the acquisition of hydrochloric acid, the sale of ferrous sulfate, the reuse of zinc and the minimization of the waste to be managed.

Thus, the project provides very positive results, proving a return on the investment made in less than 2 years.

The LIFE DIME® technology is oriented to being used in effluent treatment in the following processes:

Although the LIFE DIME® process has been designed to manage spent pickling liquor, it is also useful for all effluents with an appreciable amount of hydrochloric acid, both free and combined. Unlike other alternatives, the LIFE DIME® process is technically feasible, even when the bath contains large amounts of zinc.

A LIFE DIME® plant allows the regeneration of 99% of HCl (both free and combined) and also 99% of metal salts (mainly Fe and Zn) contained in SPL and SSL, with no additional liquid effluents (ZLD).

Nonetheless, occasional purges need to be performed in order to ensure the correct functioning of the overall process. The amount of waste derived from such purges represent 1% of the total flow in the form of strange salts and solvents.

The integration of a multiple effect system using distillation membranes for HCl distillation offers the following benefits to the overall treatment process:

In addition to being a clearly viable process financially, the investment involved in its implementation can be recovered in a period of 2 to 3 years.

Firstly, the amount of waste to be managed is hugely minimized and the purchase of hydrochloric acid is significantly reduced. Secondly, the recovery and subsequent reuse of zinc from the pickling baths produces important savings on the purchase of this raw material.

Finally, the recovery of ferrous sulfate allows the selling of this by-product.

The companies dedicated to metal surface treatment produce a significant amount of polluting waste from spent pickling baths, while requiring a high consumption of chemical reagents from the direct exploitation of natural resources. The current solutions to manage this waste are not environmentally sustainable and financially uncompetitive.

We have developed a new solution named LIFE DIME® that allows the recovery of 99% of hydrochloric acid, zinc and ferrous sulfate from spent pickling liquor, while minimizing the amount of sludge to manage, all of which translates into huge cost savings and environmental benefits.

LIFE DIME® takes into consideration the precepts of the circular economy, which is transforming waste into resources, as a successful strategy for this industry.

LIFE DIME® process not only transforms the waste from spent pickling liquor into reusable materials for the process itself, but it also reduces CO2 emissions and the consumption of natural resources.

Operation of the technology 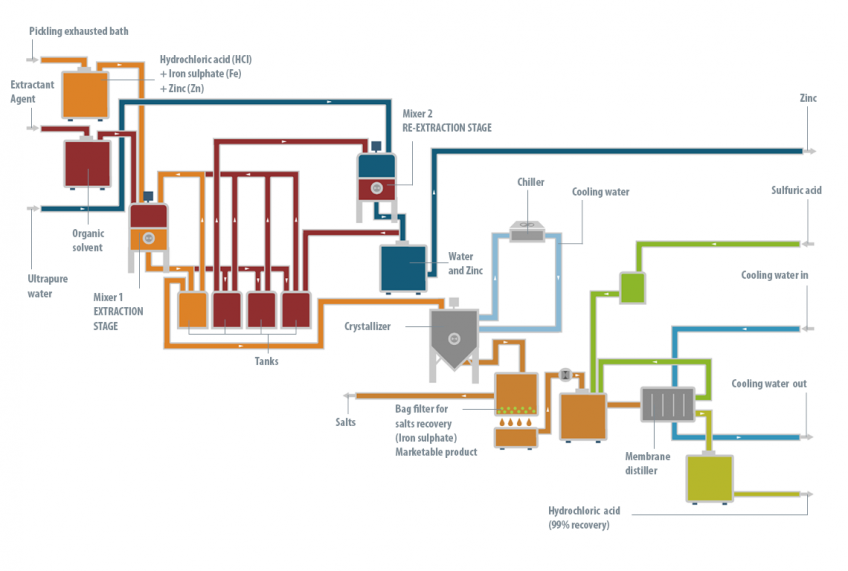 This stage is only necessary when the baths are exhausted, generally from industries with hot galvanizing processes, containing high levels of zinc. The objective of the pre-treatment stage is to remove all the zinc (95-98%) from the solution. If not all the zinc is removed at the beginning, it will be precipitated later with the iron, producing a product with a complex commercial outlet.

It has been shown that the most efficient technology to remove the zinc from the bath is liquid-liquid extraction using an organic solution as the extracting agent.

This zinc extracting agent, in turn, is regenerated by another liquid-liquid extraction process, so it is not consumed in the LIFE DIME® process. Following this pre-treatment stage, two streams are obtained: the spent pickling bath, now zinc-free, and an aqueous solution of zinc chloride.

This solution is returned to the galvanizing process where it is consumed to prepare the fluxant stream (a reagent of ammonium chloride and zinc chloride).

Once the zinc has been removed from the spent bath, or if the bath did not contain any zinc initially, the reaction stage can then be conducted.

To recover both the free hydrochloric acid and that combined in the exhausted bath, concentrated sulfuric acid is dosed in a crystallizer reactor. This reacts with the ferric iron ions present in the solution, forming ferrous sulfate heptahydrate and hydrochloric acid.

The solution is then cooled, forming ferrous sulfate heptahydrate crystals, which are easily removed by filtration from the mother liquor. This contains the ferric iron that has not precipitated, some excess sulfuric acid and the hydrochloric acid which was formed.

Also, for the hot galvanizing industry, the zinc chloride produced in the zinc separation can be reused for the production of fluxant.

Finally, the ferrous sulfate heptahydrate produced has commercial value and can be sold as a fertilizer.
The only raw material needed for the process is the addition of sulfuric acid, whose cost is fully acceptable if we consider the profits generated by LIFE DIME®:

Thus, in summary: an exhausted bath enters the LIFE DIME® process and is transformed into hydrochloric acid suitable for re-use, ferrous sulfate heptahydrate crystals which can be sold and zinc chloride which can be re-used.

LIFE DIME® can be operated continuously or discontinuously, depending on the client needs.

Environmental danger from pickling processes and other metal surface treatments

The main environmental issues arising from the surface treatment of metals relate to energy and water consumption, the consumption of raw materials, emissions to surface and groundwater, solid and liquid waste and the condition of the site when activities are discontinued.

The most concerning emissions to water include metals which are used as soluble salts. A number of liquid wastes are produced during metal surface treatment processes such as degreasing, acid pickling, alloy baths or lacquering.

Neutralization, besides being an economic burden to the metal industry, generates enormous disposal problems due to the high salinity of the treated effluent and the generation of large amounts of sludge that must be rendered inert prior to disposal at landfill sites. In addition, this procedure does not allow the recovery of any raw material or by-product.

Pickling or chemical descaling is the most common chemical procedure used to remove impurities such as stains, inorganic contamination, rust, surface oxides and other contaminants from metals surface, HCl is the pickling acid used to perform the chemical reaction.

The acid becomes more dilute and less effective with use. Once the strength of HCl has been reduced, it cannot be reused. It must then be disposed as schedule waste and refilled once it becomes too dilute to be effective.
Although different acids can be used as pickling acid, HCl is preferred for the pickling process because it is considered to enable a faster cleaning rate at normal temperatures compared to other acids used for the pickling process.

The final result of this pickling process is that all layers of impurities dissolves as ions into the acid solution. This pickling process creates large amounts of Spent Pickling Liquor (SPL) which contains the dissolved iron, chromium, copper, nickel and zinc metal salts as well as combined and residual free acid.
The corrosive nature and presence of residual acid and metals are the reasons why SPL is considered a toxic and hazardous waste.

Pickling is widely used to descale or clean steel in various steelmaking processes and it is also a crucial step in the galvanization process. Hot-dip galvanization is a corrosion protection process for steel, iron or aluminium in which the metal is coated with zinc to prevent it from rusting.

The process involves dipping clean steel, iron or aluminium components (after a pickling process) into molten zinc (which is usually around 450°C).

A series of zinc-iron alloy layers are formed by a metallurgical reaction between the iron and zinc creating a strong bond between the steel and coating. This technique requires enormous amounts of water during all its stages. It thus creates large volumes of wastewater loaded with total suspended solids and metals which are harmful to health and the environment (for each tonne of galvanized pieces 70 kg of SSL is produced).

Hence, the Spent Strip Liquor (SSL) is also considered toxic and hazardous due to the zinc that is added to the spent pickling mixture.