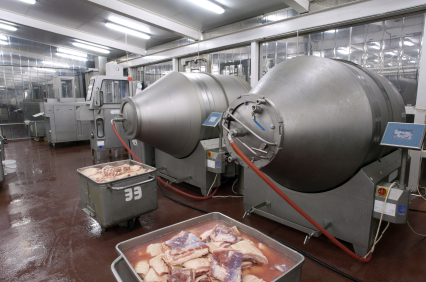 From an environmental viewpoint, the production of wastewater differs markedly depending on the type of installation concerned. Thus, whereas slaughterhouses/cutting plants generate large volumes of wastewater with a high organic load, production at manufacturing plants is lower and tends to remain fairly constant over time.

As described below, the majority of processes performed sequentially in a slaughterhouse generate wastewater:

From this point the subsequent processes vary between cattle and pigs. For pigs, these processes are as follows:

For cattle, the following processes are performed after exsanguination:

Cattle and pig carcasses then undergo a common series of processes:

The processes for poultry are similar but with the difference that much more wastewater is generated during stabling and an intermediate defeathering process is included between the scalding and singeing processes.

As can be seen, wastewater is generated during almost all the processes involved as well as when cleaning the installations. The final volume produced is high and it has been estimated that around 5 liters of water is required per kilogram body weight for the live animal. Water consumption for poultry is higher at between 5 and 10 liters of water per kilogram of live animal. The wastewater generated generally carries with it slurries, meat remnants, blood, hair, pieces of entrails, and surface fat, which together mean that the water has a content of organic matter, material in suspension, oils and fats, nitrogen (ammonia and organic), phosphates, and detergents and disinfectants used during cleaning. In addition, the load in the wastewater varies markedly depending on the time of day and even from one hour to the next.

Typical values for the parameters related to the organic matter and nutrient content of the effluent generated in a slaughterhouse with cutting plant can be found in the following table.

The most recommended option for treating this wastewater in an appropriate manner is a design that includes pretreatment of the water, which removes larger and smaller solids while also removing oils and fats and attenuating the fluctuations in flow and/or load, followed by a biological treatment to remove the organic matter and nitrogen. These steps are described in greater detail below:

The three biological treatments mentioned above are efficient and robust, and each has its own advantages and drawbacks. However, it should be noted that the anaerobic biological treatment option results in lower operating costs due to its lower energy consumption while also generating biogas.
In summary, slaughterhouses/cutting plants generate large quantities of effluents with a high organic load (dissolved and in suspension) in addition to containing nitrogen, phosphorus, oils and fats, and pathogens. The most recommended treatment system is based on the design of a complete system involving water pretreatment to remove large and small solids, along with oils and fats, and a biological treatment that removes the organic load and nutrients from the water. If the biological treatment is anaerobic, the biogas generated can be used to produce electrical energy, thereby reducing the overall consumption of the installation.