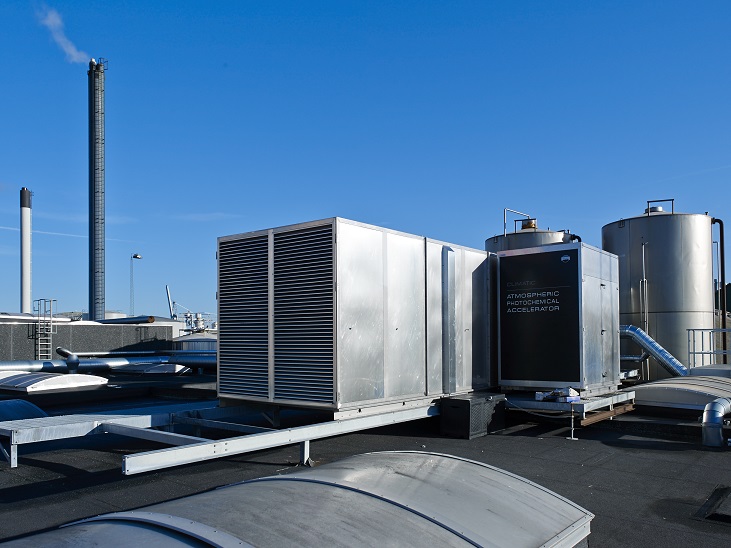 Advanced Oxidation Processes (AOP) are of particular interest for water and air treatment due to their efficiency in neutralising a great variety of pollutants by the generation of highly reactive hydroxyl radicals. Among the AOPs is photocatalysis, using mainly titanium dioxide (TiO2) as the photocatalyst, which has been extensively studied in recent years. This new technology is now considered as a competitor to classical purification techniques. Accordingly, an increasing number of scientific studies and patents can now be found in the literature.

Although, initially TiO2 photocatalysts were used in water treatment, in recent years, it has been shown that the photocatalytic oxidation of volatile organic compounds (VOCs) is generally more efficient in the gas phase than the liquid phase.

Recently, the number of air treatment patents is larger than all the patents for water treatment and self-cleaning surfaces. This shows the real interest shown by the industrial community in air cleaning applications.

The origins of photocatalysis

The first published report on photoreactivity was made by Renz in 1921. However, the first reference for the term “photo-catalysis” in its title was published as recently as 1964 by Hauffe in the Journal of Catalysis. According to Teichner et al. [1], it is interesting to recall that the concept and the term ”heterogeneous photo-catalysis” was introduced and developed in Lyon in 1972, when possible photocatalytic solutions to several environmental problems using TiO2 were also proposed.

The first studies of heterogeneous photocatalysis in Lyon were extended to environmental and pollution applications by P. Pichat and J.M Herrmann initially at the Institute of Catalytic Research (IRC). In 1999, the publication by J.M Herrmann “Heterogeneous photocatalysis: fundamentals and applications in the removal of various types of aqueous pollutants” won the award for being one of the top 10 most cited articles that year in Catalysis Today [2].

Of the available semiconductors which can be used as photocatalysts, TiO2 is generally considered to be the best semiconductor photocatalyst available at the present. The overwhelming majority of the literature concerning photocatalysis is concerned with identifying the properties, applications and theory of the use of titanium dioxide as a semiconductor. There are good reasons for favouring TiO2 as the semiconductor of choice, including:

There are already a number of commercial photocatalytic TiO2 products available on the market; notably Degussa P25 TiO2, which in many respects is considered a standard and is often used as a comparison in scientific experimentation for determining photocatalytic activity.

What is a semiconductor?

Semiconductor materials are characterised by their electronic structure, which can be described by the band theory of materials [3]. Band theory states that all materials have allowed electronic energy levels, defined as bands. Materials are classified by the energy gap that exists between these bands, also known as the band gap. Figure 1 schematically illustrates the differences in the electronic structure of an insulator (very large band gap), a semiconductor (lower band gap) and a metal (no band gap, but rather a continuum of electronic states throughout the material). According to band theory, the valence band exists as filled energy levels, while the conduction band consists of available electronic states that are vacant, until the material is thermally or electronically excited.

Figure 1. Schematic diagram of the electronic band structure of an insulator, semiconductor and a metal.

The formation of an electron-hole pair on the TiO2 photocatalyst is illustrated in Figure 2. Valence electrons responsible for bonding the atoms together normally occupy the valence band. Electrons responsible for electrically conducting properties occupy the conduction band. In between the two bands is a forbidden or electron band gap. This region is unoccupied since an electron cannot have an energy value corresponding to the forbidden level. A conductor has enough electrons to also occupy the conduction band while, for an insulator, the conduction band is essentially empty. Titanium dioxide (TiO2) is a semiconductor, meaning it has a narrower electron band gap (3.2eV for anatase and 3.0eV for rutile) than insulators. The conduction band becomes accessible to the electrons from the valence band if sufficient energy is available for excitation. This energy allows the electron to ‘jump’ across the forbidden gap. The electron excitation process leaves behind a positive charge or a hole in the valence band. Semiconductor mediated photo-catalysis is driven by the availability of this electron-hole pair to initiate the catalytic reaction. 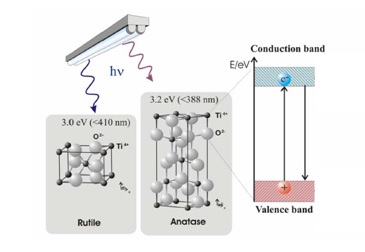 PCO in air purification involves contaminant-laden gas and a photocatalyst, usually in immobilised forms. Below is a summary of the advantages of photocatalytic air treatment: 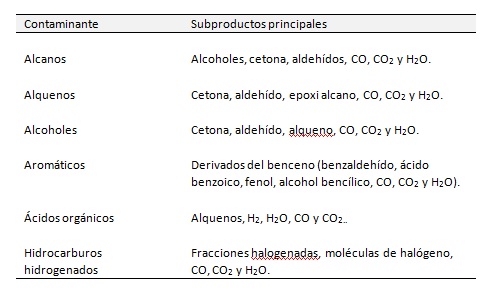 A photocatalyst can be partially or completely regenerated by purging the system with one or more of the following:

Although a lot of work has been done in photocatalysis for air treatment, the environment effect of PCO on the air is not fully understood. Generally, in the literature, the photocatalytic performance is evaluated by the conversion of the target pollutant and the influence of the different operational parameters. There is little information about the nature and type of by-products produced and no information about CO2 mineralisation. This information is essential to understanding the process and to developing successful commercial photocatalytic applications. Figure 4 shows the current understanding in the application of PCO technology to resolving air pollution problems.