The purpose of this article is to describe the conventional effluent purification processes used for the recovery of materials that make up lead acid batteries, and their comparison with the advanced processes already being implemented by some environmental managers.

Every year thousands of lead batteries are used and discarded when reaching the end of their useful life, especially in the automobile industry.  Some of the materials they are compose of have high polluting potential; especially Pb, Cd and other highly toxic heavy metals, as well as the risk posed by their high H2SO4 concentration.

Until a few years ago, the procedures followed for used batteries was controlled by regulations on toxic, harmful and dangerous substances for their storage and recycling in specific metallurgical industries with conventional purification procedures; however, all these procedures produced waste and complex effluents harmful to the environment. It was not until the application of the Water Law (1990) and the appearance of regulations on batteries and accumulators that controls were implemented and more advanced purification systems began to be implemented, imposed by the limits specified in the discharge tables.

There are currently many entities in our country qualified as environmental managers, including those that recover materials from lead-acid batteries. Scattered throughout Spain, prominent among them are companies such as EXIDE with management centres in Madrid, San Esteban de Gormaz (Soria), Zaragoza and Bonmatí (Gerona); RECOBAT located in Pina de Ebro; AZOR Ambiental in El Espinardo (Murcia); and MEMESA in Medina del Campo (Valladolid).

Used batteries are usually delivered to managers by lorries whose bodies are enabled for possible acid spills.

Once in the recycling centre, the batteries are stored in confined spaces that prevent any leaks from reaching the soil; from there they are taken to a chain where they are broken and dismantled. From here, metallic and plastic materials are separated.

The metallic materials are mostly lead, although there are also other internal components of other metals that will be treated as scrap. The plastic materials (PP/PEHD/ABS/PVC) are separated, washed and sometimes reduced to a commercial size after being pelletised, thus achieving their recovery as a by-product.

The metallic materials are washed as they are taken by a conveyor belt to the furnaces, where the lead is melted for re-use.

The effluents from washing these materials are very acidic due to the high concentration of H2SO4, and will also contain traces of Pb and other heavy metals that must be removed to make their discharge possible. Thus, Table I of the Water Law has a limit for Pb of 0.5 ppm, while tables II and III have a limit of 0.2 ppm for Pb; other metals, such as Cd, have a limit of 0.1 ppm.

The attached flow diagram shows that the conventional treatment consists of a chemical physical procedure based on the following reaction:

When the pH rises, it hydrolyses:

However, increasing the pH past 12.4 re-dissolves the precipitate as the plumbite anion, as its behaviour is amphoteric:

The precipitation pH of Pb(OH)2 is observed in the following solubility curves. 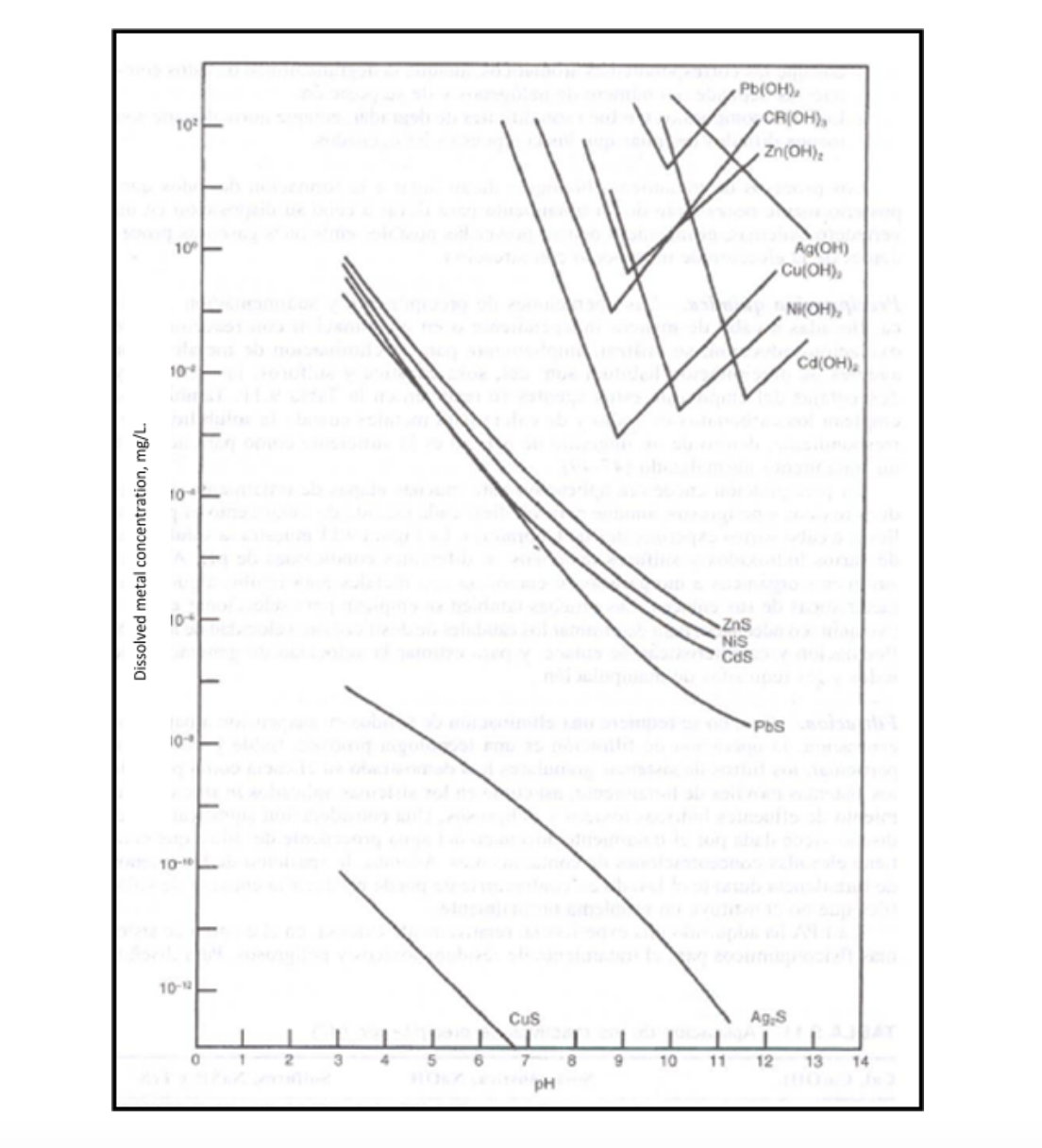 The conventional treatment of these effluents consists of the following main stages:

Adjusting the pH to approximately 9, usually either with NaOH or Ca(OH)2 . Although NaOH is more expensive, it is also cleaner and more effective as it is a strong base, while Ca(OH)2 is dirtier although cheaper. Its advantage is that the hydroxides formed are denser and easier to decant.

Dispensing coagulant and flocculant Pb(OH)2 is a fine solid, so a coagulant (PAC type) has to be added that works over a high pH range along with a suitable polyelectrolyte (to be determined by Jar testing).

Lamellar decantation Under these conditions, the type of floc obtained can be separated in a lamella clarifier at an ascending speed of 4-5 m/h.  The extracted sludge is usually transferred to a static thickener before dehydration in mechanical drying.

IF Pb and Cd are both present, a 2-stage decantation is required:

In the first stage, Pb(OH)2 is separated at pH 8.5-9.  Clarification is by gravity into a second decanter identical to the first, where the pH is raised to 10.5-11. Here, Cd(OH)2 is precipitated and separated; this prevents re-dissolution of Pb(OH)2 to HPbO2 –

An added problem is the resulting high pH in the effluent, which must be reduced with acid to reach the limit required for discharge (9.5).

Mechanical drying The most efficient mechanical drying equipment is usually the filter press, as cakes with approximately 30% dryness are obtained. Lime slurry should be added as it promotes dehydration.

Ion exchange The treated effluent will reduce the lead concentration to values close to the required limit; however, to provide a safe margin, an ion exchange column is usually provided, loaded with a chelating resin capable of removing heavy metals, such as Pb and Cd. This resin is regenerated with HCl and neutralised with NaOH.

The treated discharge, despite complying with the indicated metal parameters, will easily exceed the SO42- limit established by the discharge tables (2000 ppm). Therefore, a fee is usually agreed with the Hydrographic Confederation of the corresponding basin. This discharge is preferably used for street cleaning or water of little demand, such as for fire-fighting. The sludge obtained is usually mixed with slag and scrap at high temperatures, which promotes drying and reduces its volume. It can then be disposed of as waste.

The most polluted water comes from the first wash of the battery recycling materials, and usually has an analytical profile similar to that below (according to information from several waste managers):

These effluents usually represent a relatively low fraction of the total discharge, but is also the one most loaded with pollutants. The SO42- concentration is around 6.6%.

As the technology of evaporators has evolved, (e.g. vacuum equipment, heat pumps and systems with thermocompression) and energy consumption has been reduced, their use has been more common, as they significantly reduce the formation of waste and high salinity discharge. In addition, when the H2SO4 concentration is high, it is neutralised with NaOH to form Na2SO4, according to the reaction:

Using evaporators, the Na2SO4 can be concentrated until a marketable by-product (Glauber’s Salt) is obtained.

Glauber’s salt (Na2SO4.10H2O) dissolves in the water under cooling of the solution due to an entropy effect. It has lots of applications in the market: from preparing paper pulp (Kraft process), manufacturing detergents to use in the wood, glass and pharmaceutical industries, for example. It was discovered in 1625 by a Dutch-German chemist and apothecary, Johann Rudolf Glauber (1604-1670), who investigated Austrian spring waters and it was named after him.

As well as this, a low salinity condensate (approx. 100 ppm) is obtained, which can be re-used as washing or service water in the plant itself.

Below is a comparative table proposing the two indicated technologies. However, they are not mutually exclusive, since evaporation is applicable for small flows, and high rinse volumes would require physical and chemical treatment, albeit with much more optimised consumption and results 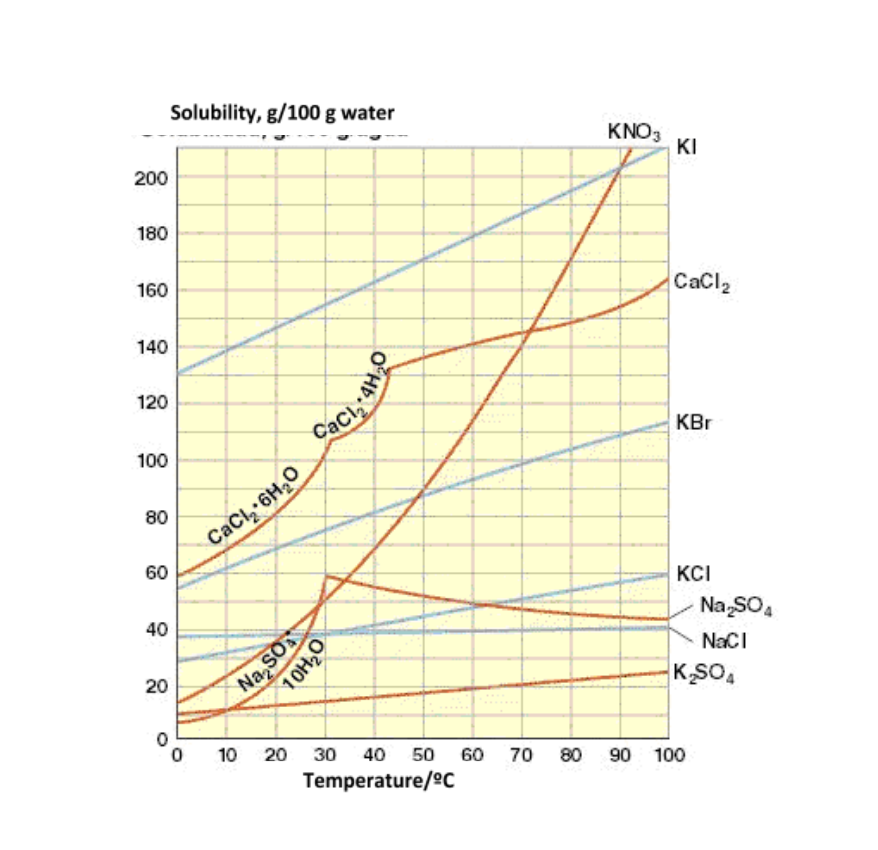 Due to the strongly acidic nature of these effluents and the presence of abrasive material, special stainless steel is used, which combines plasticity and corrosion resistance, such as that offered by the Duplex type.

These observations should also be taken into account for the instrumentation and valves (especially for the concentrate discharge valve).

Also, an anti-foaming agent will need to be added to the evaporator.

In old battery recycling plants, it was very common to find the streets coloured white, especially in winter. This was due to the Na2SO4 precipitating, as its solubility reduced with temperature. Because the sulfate index in the effluents after treatment often exceeded the 2000 ppm stipulated in the spillage table, it was recycled inside the factory as rinsing and washing water. However, not all the discharge could be re-used which caused conflicts with the corresponding Hydraulic Confederations; with high discharges fees having to be negotiated for this, as well as excessive amounts of these salts entering the ecosystem.

It is evident that the segregation and independent treatment of the most polluting effluents from dismantling and washing lead-acid batteries means that much of the rest of the effluents can be discharged; this therefore simplifies their treatment and minimises the environmental impact.

The treatment of concentrated effluents proven to be the most efficient is vacuum evaporation. Using this technology, after neutralisation with NaOH, a marketable by-product is obtained (Glauber’s salt), which minimises the sulfate concentration in the discharge. Also, a condensate is obtained that can be re-used for washing batteries and other services in the factory, due to its low salinity.

The remaining effluents have some residual acidity and a much lower metal content. These can receive simply physicochemical treatments: for example, pH adjustment, a simple filtration and separation of small amounts of Pb and other heavy metals which are removed in a chelating ion exchange column.

The biggest consumption in the evaporation process is energy. However, in these types of facilities, there are often abundant sources of heat, which can offset this consumption. Also, the latest technological advances in alternative energies can be used.