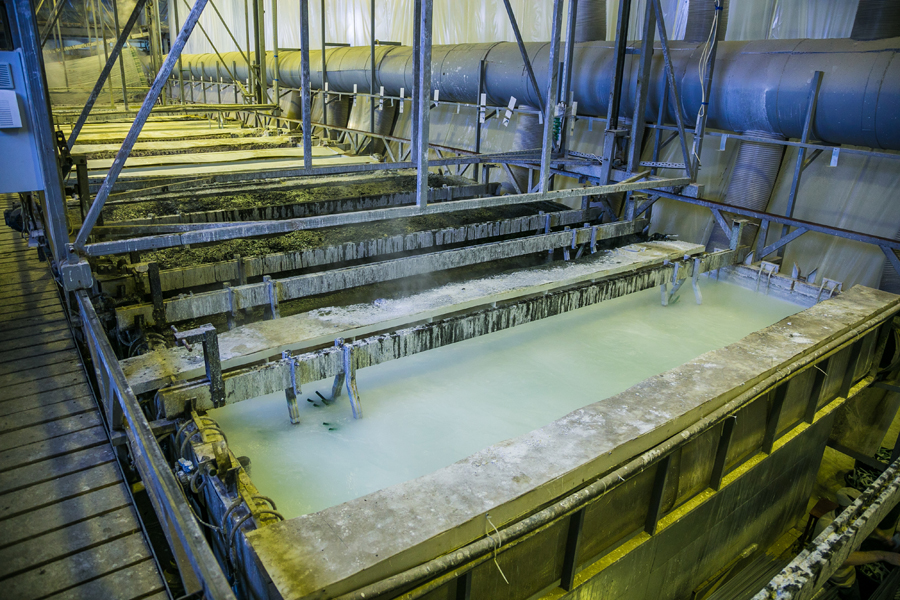 The LIFE DIME® process has been conceived as a highly innovative solution for the recovery of hydrochloric acid (HCl) from the effluents of exhausted metal pickling baths. The aim of the pickling process is to eliminate metal oxides, manufacturing scale, annealing oxide and the rust from the metal part surface so that the parts are highly clean. Most pickling tanks initially contain hydrochloric acid, diluted to 14-16% by weight. As the bath is used, however, the concentration of hydrochloric acid decreases, requiring periodic additions of acid so the pickling speed does not significantly decrease. The system is maintained until the solubility limit of the ferric chloride (FeCl2) in the hydrochloric acid itself is reached. At this point, the bath is exhausted and the pickling cannot continue. The spent bath contains an iron concentration of least 140-150 g/L and needs to be renewed by a fresh bath. For industries which also use hot galvanizing processes, as well as containing iron, the exhausted bath also contains high levels of zinc (around 25 g/L).

Most of the hydrochloric acid recovered from the spent baths via the LIFE DIME® Process is re-used in the same surface treatment process; significantly reducing the purchase of this raw material. In addition, ferrous sulfate is produced in the process, which is a by-product of commercial value (as a fertilizer in horticulture and winemaking) as well as zinc chloride, which is used in the galvanizing process as one of the basic components of the fluxant (a mixture of ammonium chloride and zinc chloride).

The LIFE DIME® process does consume concentrated sulfuric acid; however, the cost of this acid is amply compensated for by the sale of the new resources produced, as well as the savings in using fewer raw materials (hydrochloric acid and zinc chloride) and producing less waste. Thus, the project provides very positive results, proving a return on the investment made in less than 2 years, as will be analyzed later.

Current environmental legislation is increasingly demanding in terms of reducing emissions and the capacity of the industry to produce waste. The green economy manifests itself as a new, low carbon economy, based on the efficient management of resources, the minimization of waste produced and the enhancement of products and production processes respectful of the environment. Faced with these challenges, the steel industry is called upon to play a leading role at the heart of the green economy. According to data published by the American Galvanizers Association (AGA) and the European General Galvanizers Association (EGGA), just 1,000 of the plants represented by these two associations generate more than 500,000 tons per year of liquid waste that has to be treated. A large part of this liquid waste from the pickling processes in metal surface treatment industries contains high levels of zinc, which makes it more polluting while reducing the range of possible treatments.

Considering all these aspects, the solution to make this industry environmentally sustainable while economically competitive – and increasingly these two factors are more closely linked – comes from applying concepts from the circular economy: transforming waste into resources, re-using raw materials and using sustainable energy.

According to the concept of the circular economy, the steel industry, and especially the galvanizing industry, must make a firm commitment to minimize the waste produced and the consumption of natural resources as raw material. This is where the LIFE DIME® process, patented and developed by Condorchem Envitech, provides innovative technology to transform the waste produced into raw materials for the process itself, as well as significantly reducing the consumption of natural resources and CO2 emissions. 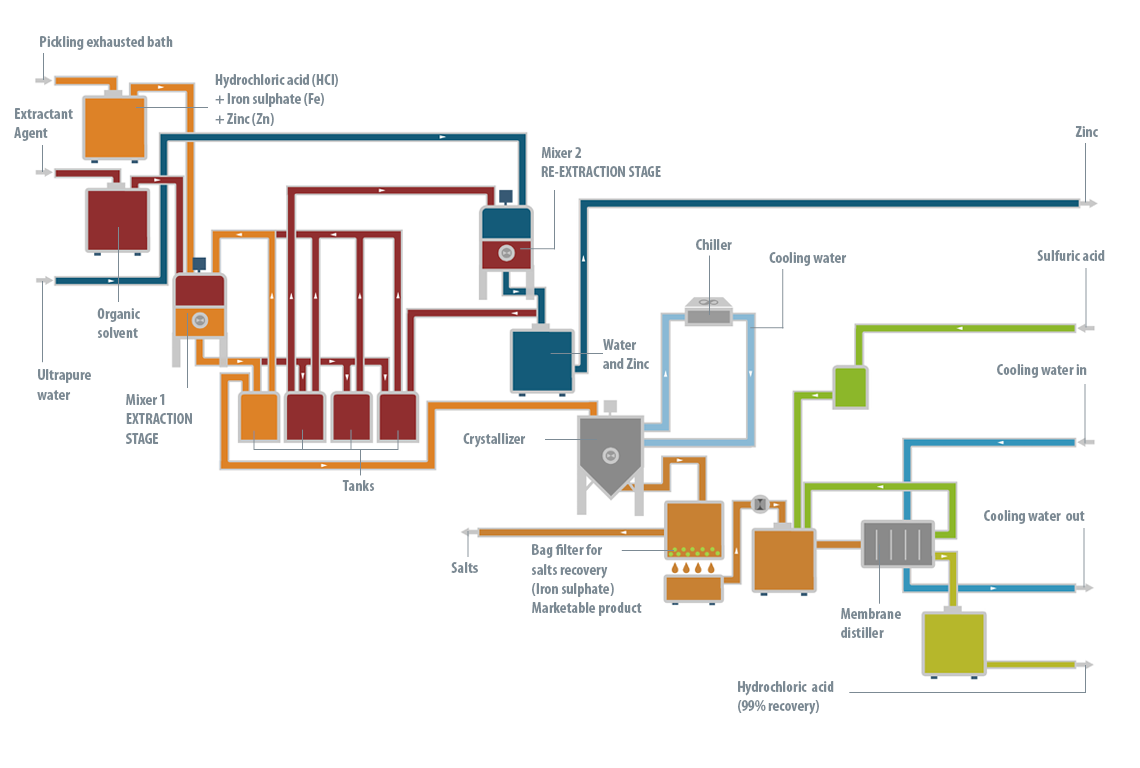 The pre-treatment stage is only necessary when the baths are exhausted, from industries with hot galvanizing processes, containing high levels of zinc. The objective of the pre-treatment stage is to remove all the zinc (95-98%) from the solution. If all the zinc is not removed at the beginning, it will be precipitated later with the iron, producing a product with a complex commercial outlet.

It has been shown that the most efficient technology to remove the zinc from the bath is liquid-liquid extraction using an organic solution as the extracting agent.

This zinc extracting agent, in turn, is regenerated by another liquid-liquid extraction process, so it is not consumed in the LIFE DIME® process. Following this pre-treatment stage, two streams are obtained: the spent pickling bath, now zinc-free, and an aqueous solution of zinc chloride. This solution is returned to the galvanizing process where it is consumed in preparing the fluxant stream (a reagent of ammonium chloride and zinc chloride).

Once the zinc has been removed from the spent bath, or if the bath did not contain any zinc initially, the reaction stage can then be conducted. To recover both the free hydrochloric acid and that combined in the exhausted bath, concentrated sulfuric acid is dosed in a crystallizer reactor. This reacts with the ferric iron ions present in the solution, forming ferrous sulfate heptahydrate and hydrochloric acid. The solution is then cooled, forming ferrous sulfate heptahydrate crystals, which are easily removed by filtration from the mother liquor. This contains the ferric iron that has not precipitated, some excess sulfuric acid and the hydrochloric acid which was formed.

The hydrochloric acid obtained – with a concentration of 18-20%, due to the azeotrope that is formed – is consumed in the surface treatment process, which means significantly less reagent is needed to be purchased, leading to savings. Thus, the LIFE DIME® process recovers and uses hydrochloric acid for the surface treatment industry. Also, for the hot galvanizing industry, the zinc chloride produced in the zinc separation can be reused for the production of fluxant. Finally, the ferrous sulfate heptahydrate produced has commercial value and can be sold as a fertilizer. The only requirement for the raw materials from the process is the addition of sulfuric acid, whose cost is much lower than the profits generated by the sale of the products formed and the savings from recovered resources and reducing waste management.

Thus, in summary: an exhausted bath enters the LIFE DIME® process and is transformed into hydrochloric acid suitable for re-use, ferrous sulfate heptahydrate crystals which can be sold and zinc chloride which can be re-used.

Recovery of up to 98% of the initial hydrochloric acid

As a preliminary phase, Condorchem Envitech has built a LIFE DIME® process pilot plant with a treatment capacity of 200 L/day of exhausted pickling baths from galvanizing industries. This pilot plant has successfully demonstrated the technical feasibility of the process and the robustness of the operation. It has also been found that the hydrochloric acid recovery obtained experimentally is excellent, at over 95% of the initial hydrochloric acid amount (free plus combined).

In a later phase, through the LIFE-DIME Project, Condorchem Envitech obtained European funding for the construction of an industrial plant with a capacity of 2 m3/day of exhausted pickling baths from galvanizing industries. This demonstrated that the pilot-scale process also works successfully on an industrial scale. In fact, due to the greater automation of the process, increased efficiency over the pilot scale was achieved, to around 98% recovery of initial hydrochloric acid (free plus combined).

Financial and environmental impact of the LIFE DIME® Process

In a galvanizing industry with a capacity of 360 Tn/day of galvanized material, using pickling baths at a rate of about 24 m3/day, the savings that can be produced by the LIFE DIME® process, in reduced hydrochloric acid and zinc chloride purchased and the waste management required, is around €720,000 per year. This high saving means the investment in implementing the LIFE DIME® process can be recovered in a period of less than 2 years, which is undoubtedly highly attractive.

In addition to being a clearly viable process financially, the environmental advantages of implementing the LIFE DIME® process are of great relevance. Firstly, around 5,500 tons/year less waste is produced and 5,000 tons/year fewer raw materials are purchased, resulting in a significant reduction in CO2 emissions by reducing the transport of 10,500 tons/year of merchandise. Secondly, 43% of the world’s zinc is used in the galvanizing industry, so the recovery and subsequent re-use of the zinc from pickling baths in the galvanization process both saves on the purchase of raw material and reduces the extraction of natural resources.

Thus, as stated above, the LIFE DIME® Process, patented and developed by Condorchem Envitech, is an excellent opportunity for the surface treatment industries to improve their profitability and make the necessary and ambitious improvements in environmental policy in terms of sustainability. In the medium term, only those companies that are sustainable from an environmental point of view can be sustainable at the financial level.