The fishing sector, or fishing industry, is a part of the primary sector, and is an economic activity based entirely on fishing and producing fish, shellfish and any other product from the sea for later consumption or as use as a raw material. Fish not only forms part of the diet of the human being, but is also used in many other products that are part of our daily lives; such as oils and certain special flours used in cooking. Therefore, talking about it as a vital part of society is something that goes without saying.

Global fish production in 2018 was 180 million tons, of which 47% corresponded to aquaculture.   The leading countries are China (14.8 million tons), Indonesia (6.1 million tons) and the United States (4.9 million tons), according to data collected in 2014.

Conservation is the result of the food handling process, so it is possible to keep the food in the best possible conditions for a long period of time. The ultimate goal of preservation is to protect foods from the action of microorganisms capable of spoiling the products or making them lose their flavor. The period of time that canned foods are kept is much longer than would be if preservation did not exist. Canned food has many attributes, since its essential elements such as lipids, carbohydrates, proteins, vitamins and minerals are almost unchanged; these qualities give it a high industrial value.

Fish is the basic raw material for the canning industry. In the process of making canned fish, manufacturing operations are described in accordance with technological procedures, among which are: reception, evisceration, cooking, filleting, packing, vacuum treatment, canning, container closure, sterilization, cooling and labeling.

The heat treatment considered critical results in the inactivation of enzymes and the destruction of the various microbial forms present in the product; while the lethal heat from sterilization can occur at 116°C or 121°C, depending on the time factor and mainly on the container size.

The following overall stages can be followed to prepare canned fish, regardless of the type in question:

Pre-treatment: This consists of handling the raw material to give it the appropriate shape and dimensions for packaging. This stage includes operations such as washing, descaling, peeling, gutting, filleting, shelling and cutting. Currently, many of these operations are done automatically, although there are still factories where they are carried out manually. In these processes, large amounts of water are used and copious discharges are produced with a high organic load.

Preparation: This is pre-cooking, and can be done in water, oil or hot air. This denatures the proteins in the fish, the meat is detached from the skeleton or shell and the products are given the texture and flavor desired.

Cleaning: This removes the bones, skin and inedible portions of the fish.

Frying: Some products are fried or cooked in oil to preserve the flavor and aroma of the food.

Airtight packaging: In general, this is done automatically.

Sealing: This is done to remove gases by vacuuming inside the can.

Heat treatment: This is done using an autoclave to destroy all the germs that can alter the organoleptic properties of the can contents.

Cooling: Usually done with cold water or air. Depending on the preservation, this is carried out at a specific time, to prevent possible alterations in the product texture.

Storage: The accumulation of products in environmental conditions that do not alter the container, by controlling temperature, humidity and dirt. For example, the process of manufacturing canned tuna. 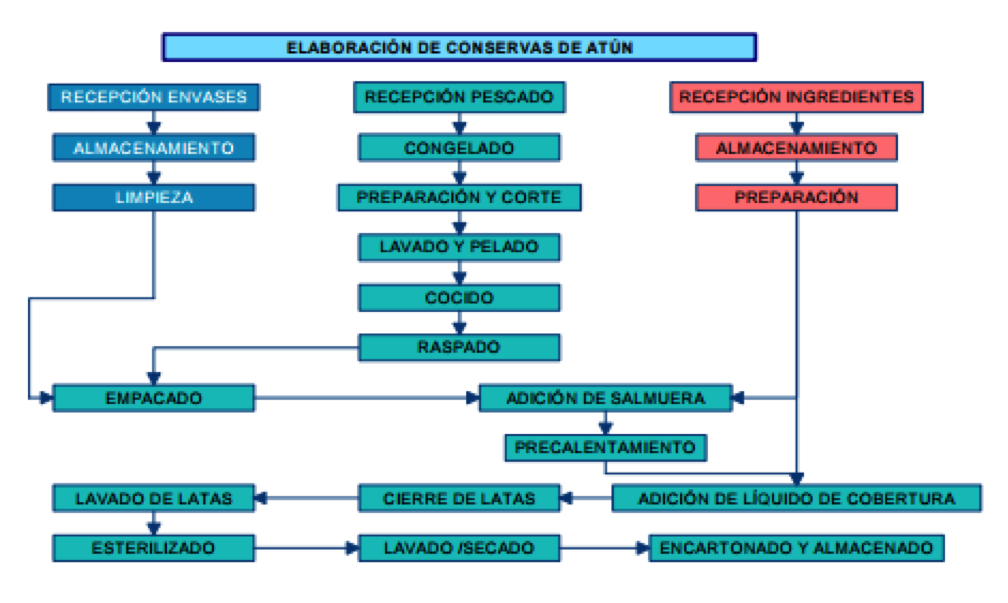 Environmental problems in the conservation sector

Industries that process fish and sea food produce industrial effluent with lots of oil and salts. Thus, treatment of wastewater is required; not only to be able to discharge the water without polluting, but also to control the bad odors produced by cooking this food.

Brine should be treated in the same way as salt water. It is only recently that companies have started to treat fish processing wastewater; they simply used to pour the waste salt water into the sea. Thus, treatment that manages both liquid and solid waste is necessary. Even options that minimize environmental impact have been considered due to the direct discharge of saltwater.

As an example of the conventional treatment of effluent produced by the fish and seafood canning industry, let us consider canned mussels and tuna.

Firstly, the effluent is separated into fatty and non-fatty and the most appropriate treatments performed on them. The following table provides data from a typical industry in the Galician estuaries:

The following treatment line is available:

After this treatment, an effluent with the following properties is obtained:

Floating sludge has a concentration of 2-3% dry matter and requires a concentration process appropriate to its intended purpose. For example, to send to landfill, it will probably be centrifuged to reach the required dry matter values (approx. 30%); however, to be used as a by-product, the most efficient treatment would be vacuum evaporation, which may be in addition to the previous step. In addition, the condensate obtained can be reused as process water due to its high quality.

An initial skimming step is used first to remove larger matter, followed by a fine sieve (of 1.5-3 mm pore size), as its low fat content means it will not block up quickly. These are automatic cleaning systems. The effluent obtained has the following properties:

Both discharges are sent to a final pumping well that discharges the mixed effluent to the sea via an undersea pipeline at 800-1000 m from the coast, to prevent problems with foam and bad odors. The applicable regulations must be complied with. 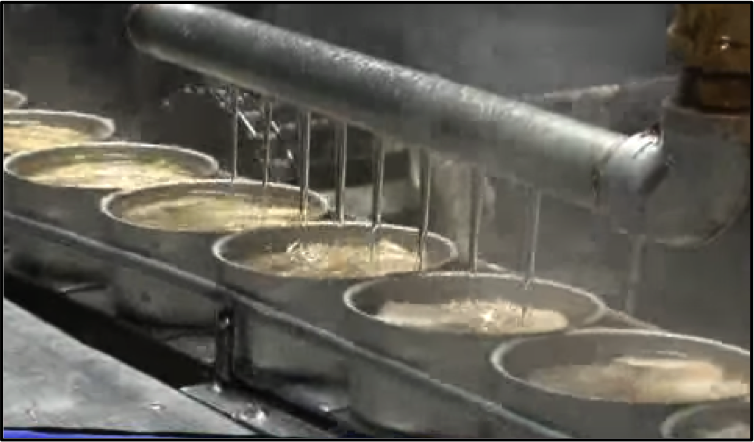 Salting fish is possibly the oldest gastronomic specialty in Spain. It dates back to the Bronze Age when salt was already being commercially exploited for use in salted fish.

At present, developed countries continue to use salted fish – not for preservation reasons, as there are now more effective methods that alter the fish quality less – but to give the fish the final aroma and flavor desired by consumers.

Salting is a method used to preserve fish (and other foods) by partially dehydrating the product, strengthening its flavor and inhibiting certain bacteria. It is done using salt itself or brine (concentrated salt solutions). The traditional preparation process is as follows:

Cleaning The entrails are removed from the fish, leaving only the meat and scales.

Stacking The fish is laid out on a layer of salt approximately 1 cm thick. Another layer of salt is added, and layers of fish and salt are successively added. A weight, equivalent to just over half the weight of the fish, is placed on them.

Preservation period They are left to be preserved for a week and a half.

Washing The fish are removed and washed with a preparation of water and vinegar.

Drying They are placed in the open air away from direct sunlight and left for a few days depending on the climate.

Currently, the salting process differs in time and in the materials used. In preparations such as roe or wind-dried tuna, the layers are left for 24 hours, after which they are washed and pressed to drain away the water. After drying, they are vacuum packed. Drying takes place in the dryer, which is an isolated room with a water extractor and dry heat applied (this is required for health reasons).

Waste from the fish salting industry can be classified as:

Wastewater treatment in the fish salting industry with a vacuum evaporator

Vacuum evaporation is the best option for wastewater treatment in the fish salting industry. One of its advantages is that it can handle high volumes of effluent. In addition, the resulting by-products, such as fats and proteins with omega-3, can be sold. An ultrafiltration membrane is applied for this in the process, followed by a vacuum evaporator.

The vacuum evaporator can achieve zero waste, as this fish salting wastewater treatment transforms salt water into a quality distilled product. Up to 95% of the original water can be recovered. To achieve this, a reverse osmosis process is applied, depending on the degree of concentration of the effluent. Then it goes to the evaporator under vacuum where the salts are dried and crystallized.

The fish and seafood industries are usually located near coasts. This is mainly due to the ease of disposing of the fish and the possibility of taking the water from the sea and returning it through underground pipelines to prevent a high concentration of pollutants near beaches and population centers. However, substances such as oils used to cook the fish and the high organic load of the effluents lead to high water consumption and produce progressive contamination at the discharge points.

For some years now, water from the washing process has been recycled to reduce water consumption and discharges, along with physico-chemical treatments, such as coagulation, flocculation, sieving and flotation.

Vacuum evaporation is a good solution both to concentrate the by-products obtained and to reduce salinity to obtain high quality condensates destined for use as washing and cooking water. 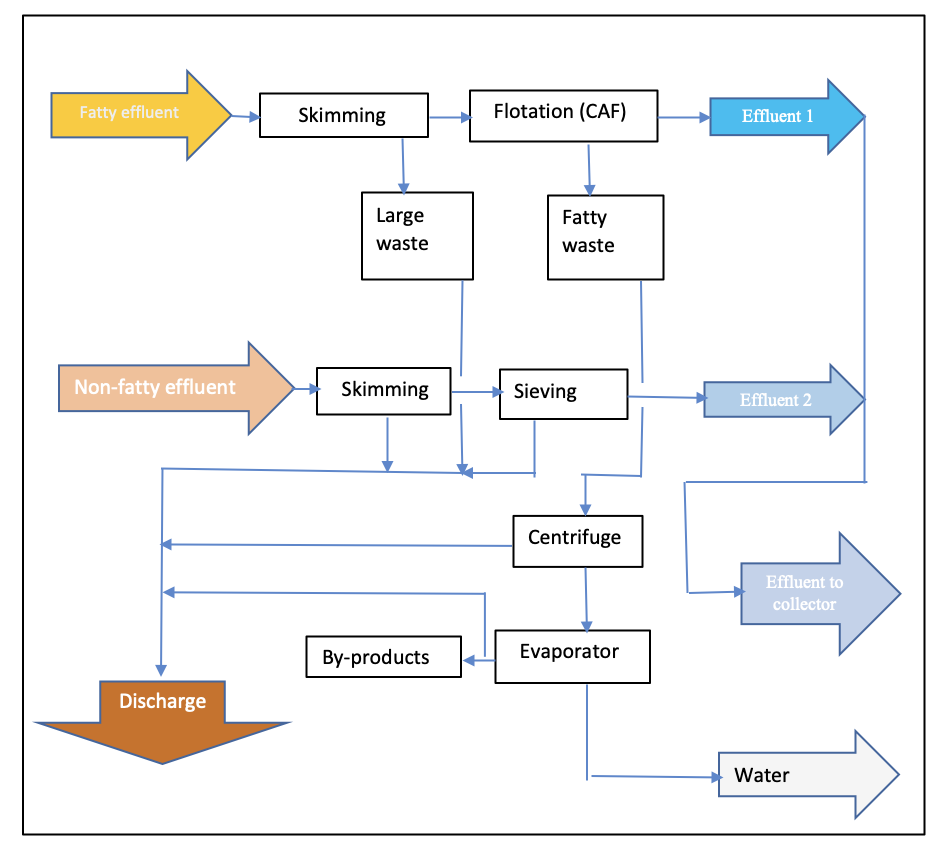 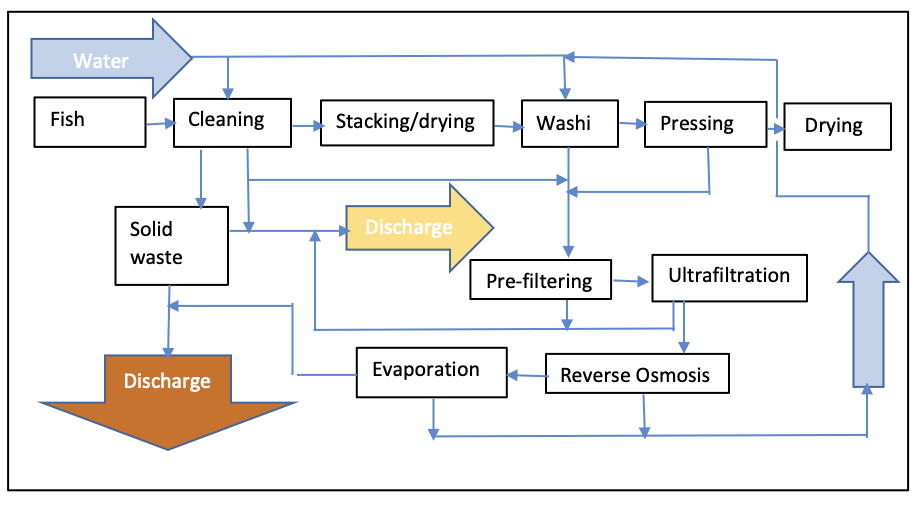