Condorchem Envitech offers a complete solution for the treatment and monetization of wastewater and digestate in all types of livestock farms.

We design and build manure management plants that transform the liquid waste into reusable resources and by products, such as:

The following diagram shows the main processes and technologies involved in a plant designed to turn the waste generated in farms into valuable resources and by products. 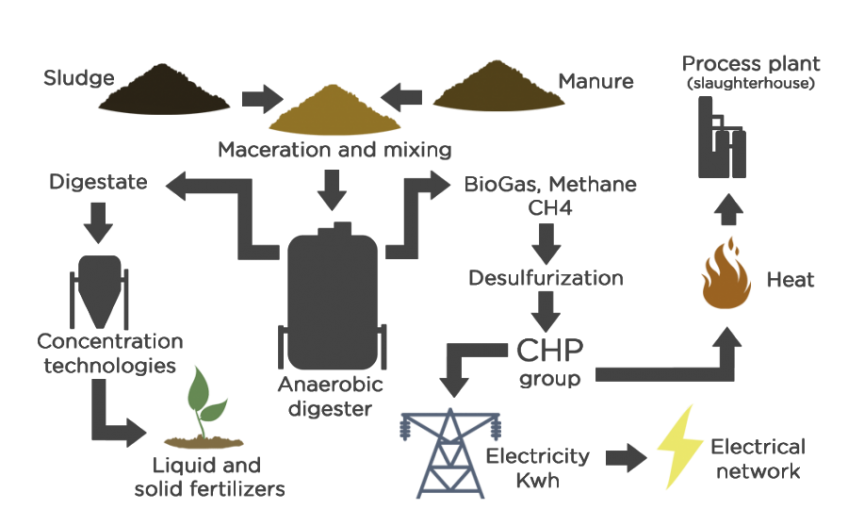 1. Digestate treatment. The waste products (liquid sludge (*) + animal manure) is sent to the raw materials tanks for storage and mixing.

2. Anaerobic digestion of manure. The waste mixture is sent to the anaerobic biological digesters for treatment, resulting in the extraction of biogas and a digestate, from which a liquid fraction is separated (88%) and a solid one (2%).

3. Biogas production and treatment in farms. The biogas is sent to the co-generation plant to be converted into electricity and heat. Alternatively, biomethane can be produced by purifying the biogas.

4. Concentration and fertilizer production. The liquid fraction of the digestate, which contains valuable organic nutrients and minerals, undergoes several concentration phases by means of mechanical and thermal systems, thanks to which a concentrated liquid fertilizer is obtained which can be sold as well as clean water that can be discharged or re-used.

Fertilizer production from manure and poultry

Depending on the chemical composition of the by-products, the processes necessary for their conversion into fertilizers varies. The by-products we have worked with mostly for recovery as fertilizers are the sludge from aerobic purification processes and the digestate produced in biomethanization plants.

To recover phosphorus in the form of a solid fertilizer, it can be crystallized in the form of struvite, a slow-release mineral fertilizer composed of magnesium, phosphorus and nitrogen, with a low metal content. This slowly provides nutrients to the soil, favoring its absorption by plants and reducing surface losses that can end up in water bodies.

In addition, the production of liquid fertilizers rich in ammonium can be viable through an adsorption-desorption process with zeolites and membrane contactors.

Sometimes, to achieve a specific relationship between the main nutrients, surplus nitrogen needs to be removed. This can be done via a process under microaerophilic conditions with low energy consumption.

Another way of transforming waste into fertilizers is, firstly, to mix the waste with other organic waste and other mineral fertilizers to adjust the nutrient levels (N/P/K) to commercial values. Secondly, the resulting mixture undergoes vacuum evaporation to remove the water and transform the material into a stable and easy-to-use solid.

In all cases we work with the customer to evaluate the identified source of waste to determine the potential of the fertilizer. Samples can be sent to our laboratory for a complete analytical evaluation; after which, our technical team will work with the customer to establish a profitable program to obtain the maximum potential of the fertilizer produced.

Fertilization is an irreplaceable agrarian practice whose main objective is to maintain soil fertility, and is not limited to restoring that extracted by the crop, but also those components lost by the soil due to washing, degradation and erosion.

NPK complex fertilizers are products that contain two or three primary nutrients (N, P, K) and possibly secondary nutrients (Ca, Mg, S) and micronutrients (e.g. Zn, Cu or B). They are applied to balance the soil content in nutrients according to their content, the needs of the crop to be planted and the expected yield. They can be solids (granular form) or liquid, with the latter being increasingly common.

However, the amount of fertilizers consumed annually is very high (over 200 million tons in 2018 according to the FAO) and increasing in recent years. This leads to a huge amount of waste, much of which has significant nutrient content (N/P/K), being produced and accumulating in landfill sites.

Thus, the circular economy in the production of fertilizers needs to be improved. This circular process is based on the recycling of products, optimizing the use of mineral resources, recovering and incorporating the by-products produced, minimizing emissions and reducing dependence on non-renewable energy sources.

Production of biogas and thermal energy from digestate

In energy recovery, the waste is mainly used as fuel or in some other way to produce energy.

Energy recovery processes drastically reduce the volume of waste while producing usually electrical or thermal energy. Energy is often consumed in the process itself, such that waste management finds farther savings in the purchase of electricity.

There are different waste treatments by which the energy can be recovered. The most appropriate treatment depends on the type of waste and its chemical composition.

The main processes used by Condorchem Envitech are the following:

Biomethanization is a biological, multi-stage process in the absence of oxygen, which transforms the most degradable fraction of organic matter into biogas. This is performed by a heterogeneous population of microorganisms forming a mixture of gases, consisting mainly of methane and carbon dioxide, with other gases in a smaller proportion (e.g. water vapor, CO, N2, H2, H2S, etc.).

Biogas is a source of energy because it is a combustible gas with a high heat capacity (5,750 kcal/m3), whose energy is used in cogeneration engines, boilers and turbines (generating electricity, heat or as a biofuel).

The type of material to be digested greatly influences the yield and composition of the biogas obtained. For maximum production, it is best to use waste rich in fats, proteins or carbohydrates, as their degradation entails the formation of significant amounts of volatile fatty acids, precursors of methane.

Biomethanization is an appropriate process for the treatment and recovery of agricultural, livestock and urban waste, as well as for the stabilization of sludge from urban wastewater treatment.

Pyrolysis is the thermal degradation of a material in the absence of added oxygen, so decomposition occurs by heat, without combustion reactions. The basic details of this process are shown below.

As a result of the process, the following is obtained:

Low working temperatures cause less volatilization of carbon and other precursor pollutants in the gas stream, such as heavy metals or dioxins. Therefore, combustion gases will theoretically require less treatment to meet the minimum emission limits established in the Incineration Directive. Compounds that do not volatilize will remain in the pyrolysis residues and will need to be properly managed.

To treat waste by pyrolysis, a series of requirements must be met. However, it is difficult to establish the type of waste considered adequate or inadequate, since it is closely related to the type of reactor used and the operating conditions. Basically, the waste considered most suitable is paper, cardboard, wood chips, garden waste and selected plastics. Whereas, bulky waste, metals, construction materials, hazardous waste, glass and plastics such as PVC are not acceptable.

Gasification is a partial oxidation process of matter in the presence of quantities of oxygen lower than those required stoichiometrically. In general terms, the details for the gasification process of a waste stream are the following:

As a result of the gasification process, the following is obtained:

Synthesis gas from the gasification process potentially has several uses:

However, not all waste is appropriate for gasification; it can be used to treat only specific materials. The material fed must be ensured to have the following properties: the minimum content of inert or wet components; a particle size of 80-300 mm; a sufficient amount of carbon to be able to carry out the gasification process reactions, without dangerous substances; and, if possible, a high calorific value.

During incineration, combustion takes place, which is a chemical reaction based on total thermal oxidation in excess of oxygen. The general requirements for waste incineration are the following:

As a result of the incineration process, the following is obtained:

Plasma is a state of matter, consisting of a gas subjected to high temperatures in which virtually all the atoms have been ionized. The result is a fluid formed by a mixture of electrons, ions and free neutral particles, being as a whole electrically neutral, but conducting electricity.

The description of this process is as follows:

As a thermal method for waste treatment, plasma has 3 possibilities:

As a result of the tests carried out in the pilot plant, this technology could treat a wide variety of waste, such as MSW, industrial waste, biomass, sanitary waste, vehicle scrapping, tires, plastics and special waste.