These compounds provide a certain toxicity depending on their concentration.  Effective removal of these organic pollutants in wastewater is a highly significant problem whose solution is urgent, since it mainly affects natural water resources.

This type of contamination is due to the presence of polynuclear aromatic hydrocarbons (PAH), phenolic compounds, halogenated hydrocarbons (AOX), BTEX, pesticides and dyes, for example; which can all be grouped together under the parameter of refractory COD.

The law 16/2002, Integrated Pollution Prevention and Control (IPPC), which transposes the European Directive 96/61/EC of the same name, establishes a list of the main polluting substances to be taken into consideration with emission limit values, where relevant.   For water, there are:

In general, a concentration of refractory COD in the residual effluent of 500-2500 mg/L inhibits the biological process of active sludge.

In addition to the compounds indicated in the previous table, there are substances that hinder or inhibit biological purification processes, which are basically the following:

These are usually found in the following industry types:

In general, a BOD5:COD ratio < 0.6 for an effluent is indicative of low degradability; and, the lower this ratio, the lower the effluent biodegradability. They are also increasingly found in domestic waste, although in low concentrations.

The toxicity of an effluent must not exceed 25 Equitox/m3  to be discharged, according to the RD Law 1/2001, July 20, approving the consolidated text of the Water Law, repealing Water Law 29/1985, August 2.

These can be classified into two types:

Intermediate processes:  The primary and secondary treatments belong to this group.  Basically, these are all those processes that separate a part of the contaminants.   One example of primary treatment is a physical-chemical one, while a secondary treatment is aerobic or anaerobic biological treatment.  Their purification yields will depend on the type of effluent and the technologies applied.  For example, a standard physical-chemical treatment could be considered as separating only colloidal, suspended materials, with an estimated 30% purification yield for the total COD, which will require secondary treatment in most cases if the required limits are not reached.  A biological treatment plant usually operates with a yield of > 90% reduction in biodegradable COD. Sometimes, effluents are resistant to biodegradation because bacteria are not able to break the bonds in the organic compounds they encounter. This can be achieved by partially oxidizing these compounds, thus promoting their biodegradation; however, there are other compounds that are toxic for bacteria and the biological process is not applicable in those cases.

Tertiary treatments are those intended to purify the effluents before possible recovery or discharge. In this group are the MBR system using membranes, disinfection processes and treatments with a specific purpose, such as demineralization.

There are other processes used in specific applications, such as the separation of oils or large organic molecules.  Examples of this case use adsorbent materials such as activated carbon, certain resins or absorbent materials.   Using organic or inorganic membranes reduces the COD in suspension, and separates part of the soluble COD at high conversion factors (70-90%).  Other techniques are also often used, such as oxidation with ozone O3 and combinations with catalysts.  Traditional oxidations with NaOCl, Cl2, or ClO2  have now fallen into disuse due to the formation of chlorine derivatives.

Evaporation is an intermediate process for this application, as it does not decompose the COD in the effluent (but partially separates volatiles components).  This is a concentration process and can reach the level of solid waste along with the rest of the water salts. The condensate obtained will contain only volatile COD and a slight leakage of salts.

As indicated, refractory COD inhibits biological treatment in effluents, and the treatment techniques used to remove these contaminants are wet oxidation and thermal oxidation (incineration).

The main types of wet oxidation technologies are:

Non-catalytic wet air oxidation (WAO) is a classic process where oxidation occurs with dissolved O2 from air, or O2-enriched gaseous streams. It is called indirect oxidation when the hydroxyl radical is produced and acts as the oxidizing agent, and direct oxidation otherwise.  In these types of oxidation of organic matter, some final products such as carboxylic, acetic, formic and oxalic acids are not mineralizable but are biodegradable, and usually represent 5-10% of the Total Organic Carbon (TOC). Thus, oxidation can be limited if they are compounds that are not toxic for sewage treatment plants. However, if their concentration is low, this system cannot be used, and catalysts must be added to prevent operation under conditions of prohibitive pressure and temperature. The COD limit to be treated is 15 g/L, as the reaction is autothermal from 20 g/L.

Catalytic wet air oxidation (CWAO) is used in cases where high mineralization is necessary. This is achieved by catalysts increasing the degradation reaction rate of organic and inorganic compounds, which are also capable of oxidizing compounds such as cyanides and ammonia with O2 as the oxidizing agent.  Catalysts tend to be certain metals that significantly reduce the required operating conditions: pressure, temperature and reaction time.

OHP is a catalytic wet oxidation process that decomposes organic matter by reaction with hydrogen peroxide (H2O2) in an acid medium under moderate pressure and temperature conditions.  The process is started by heating to the operating temperature (~ 120°C), when the strongly oxidizing group [OH] is formed.  The process is exothermic so, once it has begun, the operating conditions are maintained in accordance with a complex, balanced set of sophisticated automatic controls.  For the system to work, catalysts (usually copper and/or iron salts) are added. The oxidation is carried out in an enameled metal reactor. The energy produced in the reaction is collected by a heat exchanger used to heat the effluent itself, thus maintaining adequate operating conditions.  The pH is then adjusted, usually with an alkali, and the suspended solids (mainly the catalyst) are subsequently separated by decantation.

Supercritical water oxidation (SCWO): In the aforementioned wet oxidation processes, the primary oxidant has to pass through the gas-liquid interface.  This imposes limitations on the reactor design as a possible limitation to the material transfer speed must be taken into account.  If the critical point of the water is exceeded (647.096 K and 22.064 MPa), the difference between phases disappears as well as the transport coefficients which reach high values. This means it can operate with very high reaction rates, degrading the toxic organic compounds refractory to oxidation at temperatures of 400-650ºC and with short residence times (30-90 sec). The method can also be used to oxidize metals; this is also a negative point, as the water is highly corrosive and very special materials for the construction of the equipment are required. It also has a tendency to form precipitates, as many inorganic compounds are not very soluble in the supercritical water.

Incineration is an energy-efficient process from the point of view of consumption, using the COD as fuel, but it must be at an adequately high concentration, so as not to require the contribution of other fuels; although this can be solved with intermediate, collaborating systems to increase the COD concentration, as is the case for evaporation or ultrafiltration.   The worst drawback* is that toxic gases (e.g. NOx, dioxins and furans) are produced, which require sophisticated filtration and treatment systems for the emitted gases that make this solution more expensive. It is a very unpopular technology, due to its high polluting potential and is very limited.

The following table shows the basic features of each technology:

The guidance costs per kg of separate COD are indicated in the following comparative table: 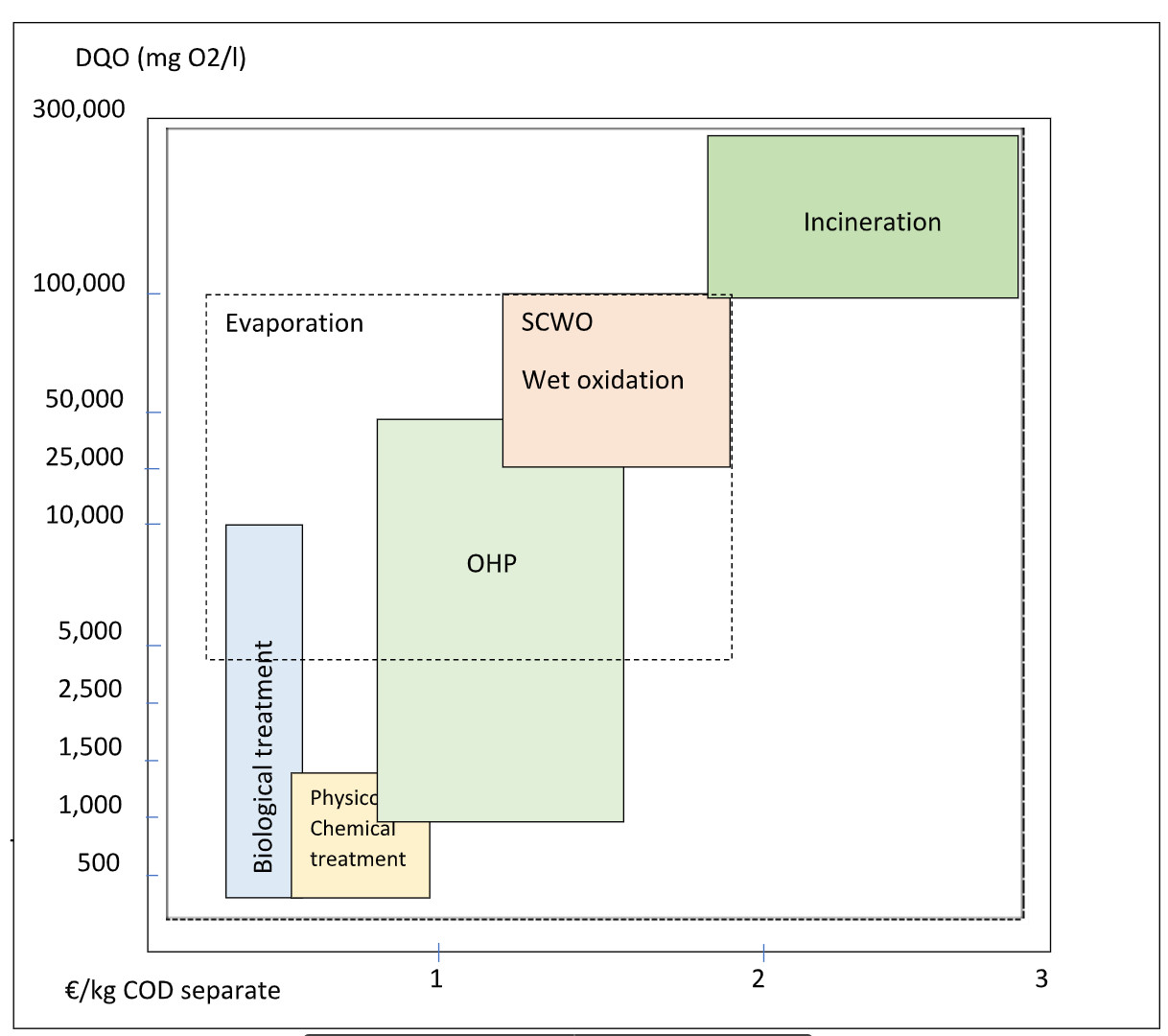 Despite the fact that they are technologies difficult to compare, the result of each is a treated effluent separated from a significant proportion of refractory organic pollutants.  The big difference is in the type of waste produced: in oxidation, they are mineral type residues from the catalysts used for the reaction; while, in evaporation, the residues are composed of all the concentrated effluent contaminants until the solid waste limit is reached, including the refractory COD.  VOCs are found in the effluent treated with this technology (condensate). Therefore, additional treatment will probably be necessary.

In the vacuum evaporation process, the highest cost is energy.  Different techniques can be used, but the one that provides the greatest energy savings is mechanical steam compression with a consumption of 50 kWh/m3 of effluent.   Depending on the effluent to be treated, a high concentration can be achieved. However, if waste is to be sent to landfill, it must reach a dryness of 30-35%, depending on the COD concentration of the source discharge. For example, for a discharge with a COD load of 10,000 ppm (10 kg COD/m3):  This value represents 1% by weight; to reach 30%, a 2-step evaporation is needed, which would lead to a consumption of the order of 100 kWh/m3.  1 kWh in industry costs €0.1, so the energy cost would be €10/m3. And, for the case of separating 10 kg of COD/m3 of effluent, the cost would be €1 per kg of separated COD. To this would be added the cost of special waste management; however, no matter how high this might be, it would not reach the oxidation process cost.

The following table compares the cost of the separate COD for OHP and evaporation, as these are perhaps the most comparable in terms of operating range and installation costs.   For OHP, the operating costs are directly proportional to the COD load: with a cost of approx. €250 per Tm H2O2, whose average consumption is 1.5 kg for 100%/kg COD; while evaporation is reduced as the COD concentration of the effluent increases:

The competitive range for Evaporation would be 4-100 kg COD/m3, as indicated in figure 1. In addition, after 50 kg of COD/m3, when OHP is no longer able to operate due to an autothermal reaction, that would mean having to cool the reactor which could pose a risk.

There are different procedures for the treatment of refractory COD in effluents that occur in certain types of industries.  The principle is to decompose the COD by oxidation or incineration; however, this has high implementation and operation costs and needs complex facilities that pose a safety risk, even after being properly controlled and instrumentalized.

The solution that seems most profitable and efficient is incineration, but it generates gases that can be more toxic than the COD itself, which requires expensive and relatively efficient filters and purification systems.

The catalytic wet oxidation option has relatively low COD limits for it to become autothermal, as indicated in this article.  Other oxidation techniques are performed under conditions of high pressure and temperature that make the process more expensive and complicated.

Despite not being a final solution (as it does not oxidize the COD), evaporation leaves an effluent with a very significant reduction in refractory COD content, and waste needing to be sent to an appropriate landfill or destroyed by a waste manager. This frees the industrialist from dealing with the problems of spillage at a cost significantly lower than that of oxidation techniques.