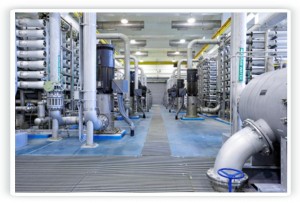 Membrane processes are physical diffusion processes of particles in water. They function because certain types of membranes allow particles with particular characteristics to pass through them, while blocking the passage of particles that do not possess the same characteristics.Membranes emerged as a viable means of water purification in the 1960s with the development of high performance synthetic membranes. Implementation of membranes for water treatment has progressed using more advanced membranes made from new materials and employed in various configurations. An increasing scarcity in fresh water sources fuelled a push towards alternative resources such as ocean water.

Membranes are becoming increasingly popular for production of potable drinking water from ground, surface and seawater sources, as well as for the advanced treatment of wastewater and desalination. These technologies have been one of the most used technologies for the treatment of water over the last two decades. It is a very high performing system.

Today there are many different types of membranes that allow the passage of solutes and others depending on their nature, ionic charge or size.

In this case the classification is based on Division factor, then there are the most important types like to describe the main types according to this criteria:

Micro-filtration membranes have a pore size of 0.1-10 µm, enough to restrain all types of bacteria, turbidity, macromolecules, colloidals, etc. These are used during cold sterilization of liquid food and pharmaceutical products, water microorganism reduction, water pretreatment for nano-filtration and reverse osmosis, etc.

By means of ultra-filtration, particles with a size of 0.001-0.1 µm are removed. All viruses, macroproteins, antibiotics, etc, are restrained in these membranes. These have application in the removal of harmful organic substances from food and drink industries, in the removal of trihalomethanes from water, in the treatment of wastewaters and in the textile industry, amongst others.
By means of nano-filtration, particles with a size of 0.1 nm-0.001 µm are restrained, allowing water separation from most molecules, although low molecular weight particles are partially restrained in the membrane. Nano-filtration is used for water-softening, wastewater heavy metal elimination, wastewater decontamination, pretreatment for reverse osmosis, nitrates elimination, colour removal, etc.

Reverse osmosis uses a procedure whereby through a semipermeable membrane the chemical potentials of two dilutions located one on each side of the membrane tend to equalize, making it operate in reverse.

The concentrate generated should be eliminated from direct contact with the membrane to prevent an increase in ion concentration that can precipitate salts on the membrane surface.  This provokes a loss of effectiveness of the process in addition to increased maintenance costs.  It is also important to perform pretreatment to prevent clogging.

Electrodialysis consists of the elimination of electrically charged ions, those of which are dissolved in water.  To carry out this elimination phase, a pair of distinctly charged electrodes are introduced into the feed water so that the dissolved ions will be attracted to the electrodes of opposite sign to their own.  This achieves moving the ions from one place to another in the dissolution.

The alternating use of anion and cation selective membranes is essential for the feed water to continue losing negative and positive ions after passing through the separation zone.

Most interestingly is alternately placing the membranes so that in some of the channels solutes are concentrated in water called concentrate.  In other channels the feed water circulates, gradually losing its contaminants until it finishes the process with a very low salt concentration.

In this case, the polarities of the electrodes are periodically altered so that water flows temporarily change direction receiving purified water from those conduits carrying the concentrate and vice versa.

This method eliminates the risk of formation of precipitates, fouling and clogging of the membranes thanks to the periodic change of water flow direction which facilitates cleaning pipes and membranes and avoids the emergence of slime and other deposits in the plant. 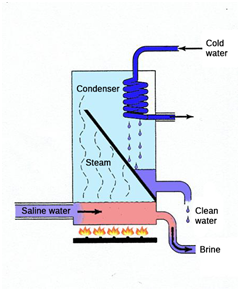 The treatment of saline and briny effluents is not possible using conventional processes. The only technology that offers a complete solution is vacuum evaporation, given that reverse osmosis or electrodialysis generate a discharge effluent that must be managed. And conventional distillation entails costs that make it financially unviable.

However, there is a technology that, though the first patent dates from 1963, its use is currently beginning to emerge harnessing all the developments in membrane engineering. It is membrane distillation.

From the commercial point of view, it is a technology that has been widely implemented for the
following reasons:

Despite these drawbacks which, as the research progresses are overcome, the technology has a series of advantages that make it competitive in ever more applications. The most important advantages of membrane distillation are:

The selection of the membrane is key for the process to function well. The characteristics of the membrane directly influence the process; the most important are: the porosity, the size of the pore, the thickness of the membrane, the thermal conductivity and the composition, which is related to the resistance to chemical attack.

The characteristics of membrane distillation make it a technology that may be satisfactorily applied in such varied areas as:

Membrane distillation is a competitive technology in a wide variety of industrial sectors given that it makes it possible to treat complex effluents. It is a technique that, together with vacuum evaporation, are among the few technologies that make it possible to treat saline and briny effluents without producing, if necessary, a discharge flow, given that the separation is not limited by the equilibrium.

However, membrane distillation it still not a technology with high energy efficiency due to the heat loss resulting from the conductivity of the membrane. As such, its application is restricted to those applications in which conventional distillation or vacuum evaporation are not viable alternatives, as is the case when wishing to concentrate acids or corrosive substances.

Which is the best way to treat my wastewater?

Contact us and our team of experts in wastewater treatment will get back to you with a fully customized proposal.

There are four main types of traditional modules (1-4). To To resolve the most common problem of the membranes which is the sealing caused by the residue layers that accumulate on the surface of the membrane during the filtration process, vibratory membranes VR were developed some time ago (5):

This is the simplest configuration, consisting of two end plates, the flat sheet membrane, and spacers. In tubular modules, the membrane is often on the inside of a tube, and the feed solution is pumped through the tube.

The most popular module in industry for nanofiltration or reverse osmosis membranes is the spiral wound module. This module has a flat sheet membrane wrapped around a perforated permeate collection tube. The feed flows on one side of the membrane. Permeate is collected on the other side of the membrane and spirals in towards the centre collection tube.

Hollow fibre modules used for seawater desalination consist of bundles of hollow fibres in a pressure vessel. They can have a shell-side feed configuration where the feed passes along the outside of the fibres and exits the fibre ends. Hollow fibre modules can also be used in a bore-side feed configuration where the feed is circulated through the fibres. Hollow fibres employed for wastewater treatment and in membrane bioreactors are not always used in pressure vessels. Bundles of fibres can be suspended in the feed solution and the permeate is collected from one end of the fibres.

Porous tubes with inner diameters ranging from 5mm to 15mm are coated with micro-porous layers of PVDF or PES on either the inside or outside walls. Depending on the orientation of the micro-porous layer, tubular modules – consisting of individual tubular membranes fitted into a cylindrical housing – are either operated in outside-in (waste water stream flowing outside individual tubes) or inside-out (waste water stream flowing inside individual tubes) configurations.

The big difference compared to traditional membranes is that the basic design is vertical instead of horizontal, which means that the space required per unit is less than for other separation systems. 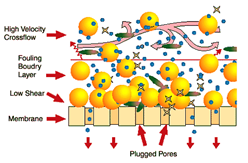 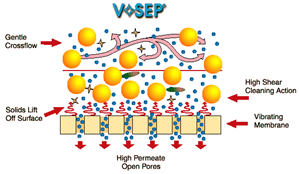 These vibrating membranes are capable of filtering any type of wastewater and can treat effluents with a high load of solids. In addition, it is a technology that does not require chemicals for operation, apart from those that are necessary for periodic cleaning of the membrane.

Vibratory membranes allow you to recuperate around 90% of the treated water as clean water that can be emptied or reused.

The type of membrane that is used in VR systems varies depending on the effluent to be treated. A very general classification would be as follows:

Other important parameters are pressure, temperature, amplitude of the vibration and the time of residence of the material inside the membrane.

All of these parameters are optimized during initial tests and are then recorded in a PLC that controls the system automatically.

In addition to all of this, it must be added that this is a modular system that can be modified after installation, should it be necessary:

I need to treat my wastewater

Contact us and our team of experts in wastewater treatment will get back to you with a fully customized proposal.