Before the emergence and industrialization of reverse osmosis membranes in the mid-1960s, water was desalinated to make it potable exclusively by using evaporation equipment that consumed a significant amount of energy.

Currently, there are small desalination plants evaporating seawater or brackish well water.These plants consume small amounts of electrical energy, which can be obtained by windmills, solar panels or other renewable electrical energy sources.

The technologies used today in water desalination processes can be classified according to the following main criteria:

According to these criteria, the main associated technologies can then be divided as follows: 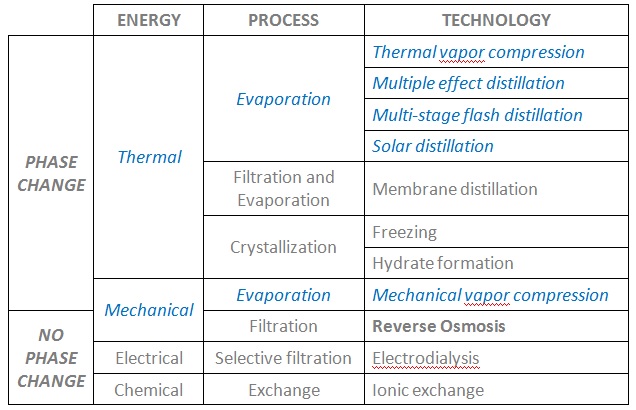 This article focuses on current technologies based on Evaporation processes that are suitable for water desalination.

Which technology is best to desalinate my water?

Contact us and our team of experts in desalination projects will get back to you with a fully customized proposal.

This is one of the two technologies used This consists of obtaining distilled water by the same process as multiple effect distillation, but by using a different source of thermal energy.

These are thermal compressors (or thermocompressors), which consume medium pressure steam from electricity generation plants (if it is a dual plant, it is process vapor obtained expressly for this purpose).

They take part of the vapor produced in the last stage at very low pressure, compress it and obtain an intermediate vapor pressure comparable with the previous ones suitable to contribute to the 1st stage, which is the only one consuming energy in the process.

The yield from this type of plant is similar to those from multiple effect distillation (MED) plants; however, their desalination capacity can be much greater by allowing greater adaptability for the input from steam production plants.

They are often considered to be the same process, but here they will be treated individually as the energy from the plant is consumed by different equipment.

In MED processes, the water to be treated passes through a set of evaporators in series.

The steam from one cell is used to evaporate the water in the following, while the primary energy input is to the first stage.

These are intermediate size plants and are especially indicated when they can be combined using residual heat from turbine or cogeneration installations, for example. 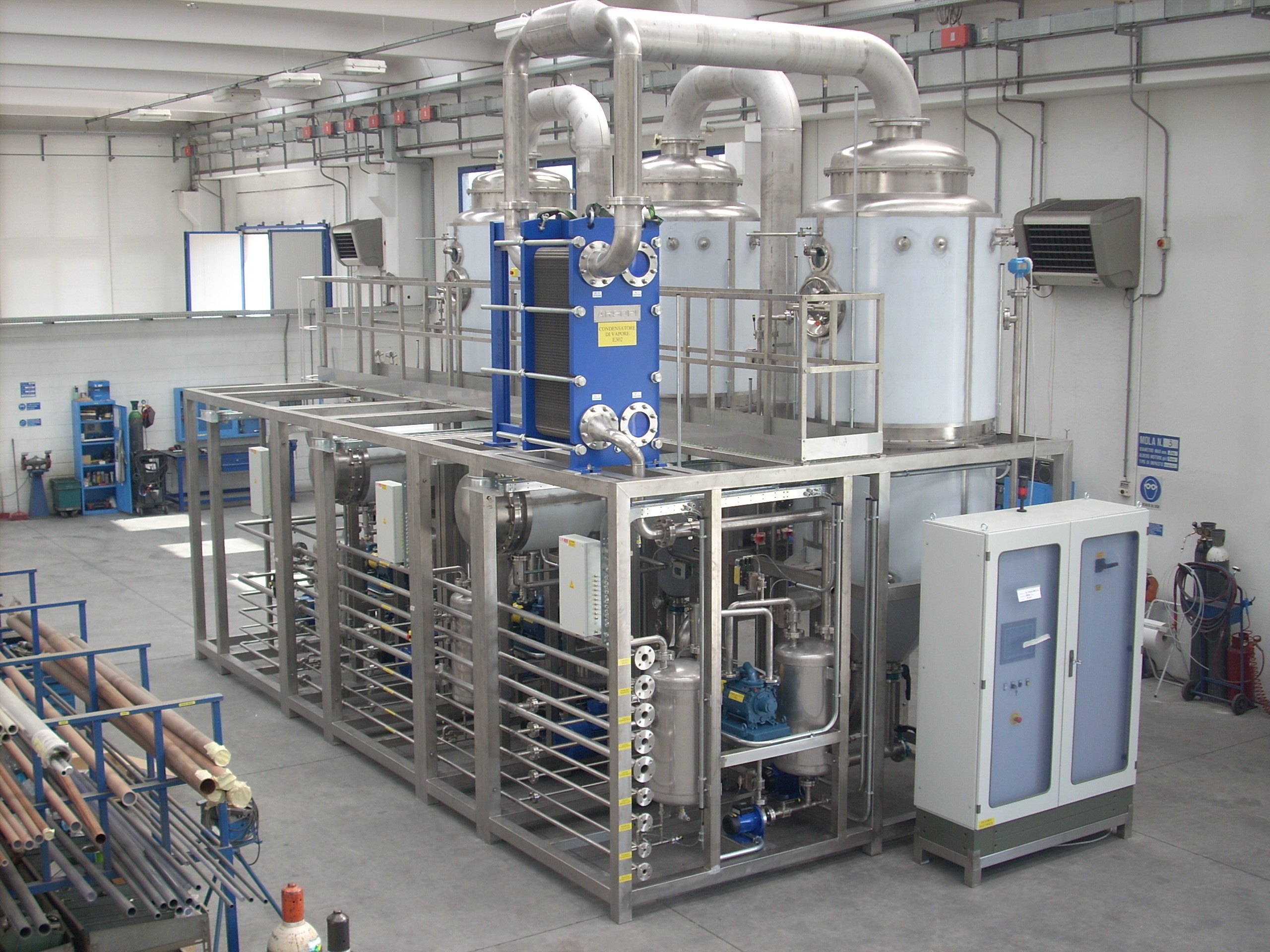 The water to be desalinated is heated at low pressure, which causes sudden, irreversible evaporation. This process is repeated in successive stages where the pressure decreases according to different conditions.

It is suitable for waters of a high salinity or those of a higher temperature and greater pollution. The major disadvantage of MSF plants is the high-energy consumption.

Currently, there are facilities where electrical energy generation from solar parks is combined with drinking water production from flash type evaporation plants.

Vacuum evaporators using mechanical vapor compression (MVC) evaporate the liquid, in this case salt water, on one side of the exchange surface, and this is compressed sufficiently to condense on the other side and thus maintain the water distillation cycle; saving losses from the process and the elevation of the boiling temperature of the salt water with respect to pure.

These small devices are much more reliable and simple to operate than reverse osmosis equipment and are virtually maintenance-free, which makes them ideal for supplying fresh water to small population centers, remote areas or islands, for example.

The specific consumption of these facilities is lower than for other distillation processes, with the equivalent electrical consumption normally about 10 kWh/m3.

The biggest limitation of this type of technology is the maximum size of the volumetric compressors used. Its maximum capacity does not allow for high production of desalinated water.

Another way to obtain potable water from the sea or brackish sources is via vacuum water evaporators, which take advantage of the residual heat sources from cogeneration engine cooling circuits.

This increases the percentage energy recovery and reaches the minimum objectives to be able to charge energy premiums sold to the network.

Currently there are small evaporation plants to desalinate brine or brackish water sources, which require small amounts of electrical energy that can be obtained from windmills, photovoltaic panels or other forms of renewable energy.

In evaporation processes for obtaining potable water from salt water, the energy consumption does not depend on the salinity of the water treated; thus, the more saline the input water is the more advantageous they are, from this point of view, with respect to reverse osmosis processes.

The membrane technique associated with reverse osmosis, and comparable from the energetic point of view with evaporation, is forced osmosis.

This process produces desalinated water using a semipermeable membrane and a solution of an easily separable compound; this significantly increases the osmotic pressure, which forces the flow through the membrane.

It is carried out at very low pressures and at room temperature, leading to very low energy consumption.

I need to desalinate the water of my company

Contact us and our team of experts in desalination projects will get back to you with a fully customized proposal.