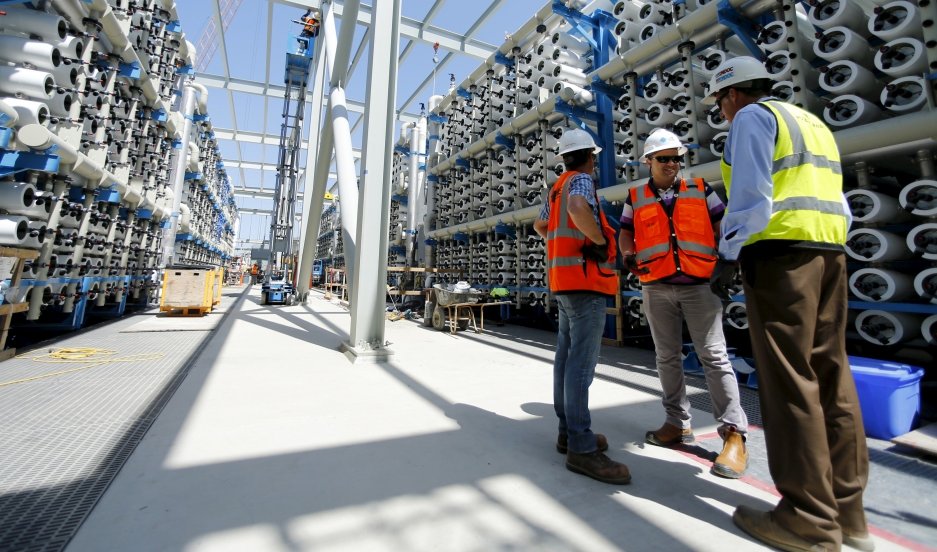 Desalination technologies date from the time of Aristotle (384-322 BC) when he made the first known evaporator and spoke in his works about the desalination of sea water. However, it was not until after World War II that the first desalination plants began to be built.

In 1960, at the University of California, the first reverse osmosis membrane made of cellulose acetate was constructed, which was capable of preventing the passage of salts and allowing the passage of a reasonable flow of water. From this basic membrane, technology has continued evolving, providing greater energy efficiency and lower operating costs.

There is a limit to the energy efficiency that can be achieved, as thermodynamically there is a minimum energy cost that cannot be reduced. This depends on the physicochemical properties of the water to be desalinated, the percentage recovery of the process and the salinity. Thus, for example, the theoretical minimum energy consumption required to desalinate seawater with a salinity of 35 g/L and a standard recovery of 45% is 1.97 kWh/m3.

Using the best technology currently available, the minimum industrial consumption is 2.51-2.74 kWh/m3, depending on whether Pelton turbines or isobaric chambers (which are more efficient) are used for pressure recovery. Based on these values, the scope available for reducing energy consumption is already very limited.

To continue reducing energy consumption, advances in membrane auxiliary equipment and hydraulic circuits can be ruled out, as there is practically no room for improvement. The most promising lines of research focus on reducing the working pressure without reducing the permeate flow. The major membrane manufacturers are working in this direction, and there are already membranes working satisfactorily at a total pressure of 55 atm, instead of the 70 atm which was common until recently.

The medium-term future is worrying, as fresh water supplies will become less reliable and less available. It is estimated that 1% of the world’s population is supplied with desalinated water in 2016, while this proportion is expected to reach 14% in 2025. Given this scenario, advances in reducing desalination energy consumption will allow reverse osmosis desalination plant construction throughout the world to continue to proliferate.

Energy consumption depends heavily on the salinity of the water to be treated, so it will be necessary to prioritise the sources from which fresh water is obtained. The future seems to lie, firstly, in the reuse of wastewater, followed by the desalination of the brackish waters of the interior. Desalination of seawater should be the last resort. In Israel, for example, a country at the forefront of efficient water use and water technologies, 80% of wastewater is reused.

An economical alternative currently under discussion is the reverse osmosis of already purified urban wastewater for injection into underground aquifers. This process is fast and controllable, and would mean later purification of this water would not be complex. Currently, in Spain, the processing of urban wastewater into potable water is illegal, although technically possible. Perhaps a way around this would be to transfer reverse osmosis-treated wastewater into an underground aquifer and convert it into drinking water at a later date.

The United Nations 2014 report on water development in the world (http://www.unesco.org/new/es/natural-sciences/environment/water/wwap/wwdr/2014-water-and-energy/#c1464954) states there are more than 16,000 desalination plants in over 150 countries around the world, with a production capacity that could double in 2020. Current activity in reverse osmosis research projects may lead one to reach the following conclusions: (1) this technique will be the reference technology for freshwater production for the next 10 years and will continue to improve, and sometimes substantially, and (2) some research projects are very promising and will eventually provide useful and valuable results which will further reduce energy, environmental and overall costs.

Some of the most promising research projects for desalination technologies are the following:

This technology is based on a system comparable to a conventional reverse osmosis system but in batch operation. The percentage recovery is determined by the frequency of the purge stages initiated by specific software rather than mechanical design and the number of stages, as would be the case for a conventional reverse osmosis system. The ReFlex system begins by performing batches at low pressure, which gradually increases as the concentration increases, until the indicated recovery is reached. The average pressure in this operation is less than the constant pressure of a conventional system. In addition, the purge pressure is minimal, unlike the conventional system. Through this type of operation, energy consumption compared to the conventional system is reduced by 20-35%.

IDE Technologies has developed a process with 16″membranes arranged vertically which reduces the amount of pressure vessels, collectors, control equipment and plant size. This technology uses very compact plants and is especially important when it comes to designing high capacity desalination plants. The company has designed and built the largest and most advanced desalination plant in the world to date with this advanced technology; located in Sorek (Israel) with a capacity of 624,000 m3/day.

A group of researchers at the University of Berkeley (USA) has designed and built a perforated graphene oxide membrane to a thickness of one atom, which makes desalination possible at a minimum of the cost of conventional reverse osmosis. The pores can be modified to vary the permeability of the membrane. If its application is confirmed on an industrial scale, current reverse osmosis systems will be revolutionised and operating costs significantly reduced.

The innovative improvements being introduced in reverse osmosis are the result of research and they make this technology the reference in the short and medium term for the removal of salts to produce both drinking and industrial grade water. This technology is also suitable for industrial applications based on the concept of zero discharge.

Reverse osmosis enjoys a clear hegemony for its effectiveness in industrial applications and, associated with it, is a series of ancillary techniques that can improve performance still further in particular situations. This is the case with forward osmosis and membrane distillation. Forward osmosis consists of producing a high osmotic pressure, by adding an easily separable compound, to force the flow through the membrane. This is highly energy efficient and in some cases, is a competitor for reverse osmosis; it is a technique with a promising future. In addition, a relatively recent technology, membrane distillation, is suggested as a solution for mixtures which are difficult to separate, and where the combination of the different vapour pressures and permeability through a semi-permeable membrane makes the separation effective and viable. Both technologies are in addition to reverse osmosis and pave the way for optimal treatment design in numerous industries.

Therefore, reverse osmosis and associated technologies are likely to remain the first choice for the separation of salts from water in the foreseeable future, for both human consumption and various industrial applications. At present, the cost of desalinated water for human consumption is double that of surface freshwater. However, as the latter becomes increasingly scarce and less reliable, the costs of its extraction are expected to equal those for desalination by 2025.