Biomethanization is a process in which a natural selection of microorganisms decompose the organic matter through anaerobic digestion, in the absence of oxygen, into biogas and stabilized solid waste (approximately half by weight of the initial waste).

Biogas, which is a mixture of methane, carbon dioxide and other minority gases, may be used as fuel as, although its composition will depend on the organic matter digested, the methane purity is usually approximately 60%.

Despite the fact that the process of anaerobic digestion has been studied since the middle of the last century, its application for treating the organic fraction of urban solid waste (OFUSW) is relatively recent. In fact, the implementation of selective waste collection, with the separation of the organic fraction, was one of the causes that have driven the development of new treatment routes. The OFUSW is characterized by a high moisture content, so typical disposal methods such as incineration or depositing in landfills are not the most suitable.

Thus, the most appropriate treatments for the organic fraction are two: biomethanization and composting, with their respective variations. The main advantage of the first technique compared to the second is the fact that it is a technology that not only does not consume energy, but produces it. In addition, it is a renewable energy that actively contributes to decreasing the production of greenhouse gases. This energy balance obviously has a positive impact on the operation costs. In addition, anaerobic digestion is a technology that is particularly suitable for treating solid waste with a high moisture content and that requires a less strict balance of nutrients than composting.

This means that if there is insufficient availability of waste of plant origin, anaerobic digestion may be technically more suitable. In contrast, the process of biomethanization of MSW is more complex, because the process has more stages from the moment the organic fraction enters the plant. This entails a greater initial investment for implementation.

In the biomethanization process it has also been demonstrated that in most cases greater amounts of biogas are produced, that are richer in methane, if the substrate to digest is a mixture of OFUSW and slurry from wastewater treatment plants, which is known as codigestion. The slurry from wastewater treatment plants is a very important source of nutrients, with very balanced proportions.

The biomethanization process begins with feeding the organic substrate (OFUSW, slurry from wastewater treatment plants or a mixture of both) into the anaerobic digesters, which operate with a retention time of around 20-25 days. Two effluents come from the digester, one as a gas, biogas; and the other as a liquid, the digested sludge with a 5% concentration by weight. The digested sludge, already stabilized, can be used in agricultural applications as a fertilizer (compost), once it is dehydrated. In the dehydration process, generally filtration or centrifugation, a concentration of up to around 25-35% dryness is achieved. The liquid fraction obtained during dehydration must be treated correctly, as its load, especially nitrogen and phosphorus, is high. An alternative is to treat this current with a biological purification process, which would need the addition of an external carbon source to enable the biomass to grow. Another even more sustainable option consists of concentrating the liquid fraction from the dehydration by a vacuum evaporation process, using the residual thermal energy produced in the transformation of the biogas into electricity (cogeneration). Biogas is usually used for electricity production in combustion engines or microturbines.
In both cases, as a result of the production of electrical energy, a residual heat is produced that must be eliminated.

This heat may be used efficiently to preheat the substrate upon entry into the digesters and thus keep it working constantly at the optimum operating temperature (36ºC in mesophilic anaerobic digestion and between 45ºC and 65ºC in the case of thermophilic digestion) at the same time as evaporating the water of the liquid fraction of the dehydration. As result of this evaporation-concentration a waste is obtained that is practically dry, with a reduction in weight of around 75%, and a current of water with a high purity.

Thus, the organic fraction of the urban solid waste may be revalued with a biomethanization plant that is sustainable and energy self-sufficient. This plant may be designed and operated to convert the OFUSW into compost, which can be used in agricultural applications, electrical energy, suitable for sale to the general electricity grid, and water with a high purity. 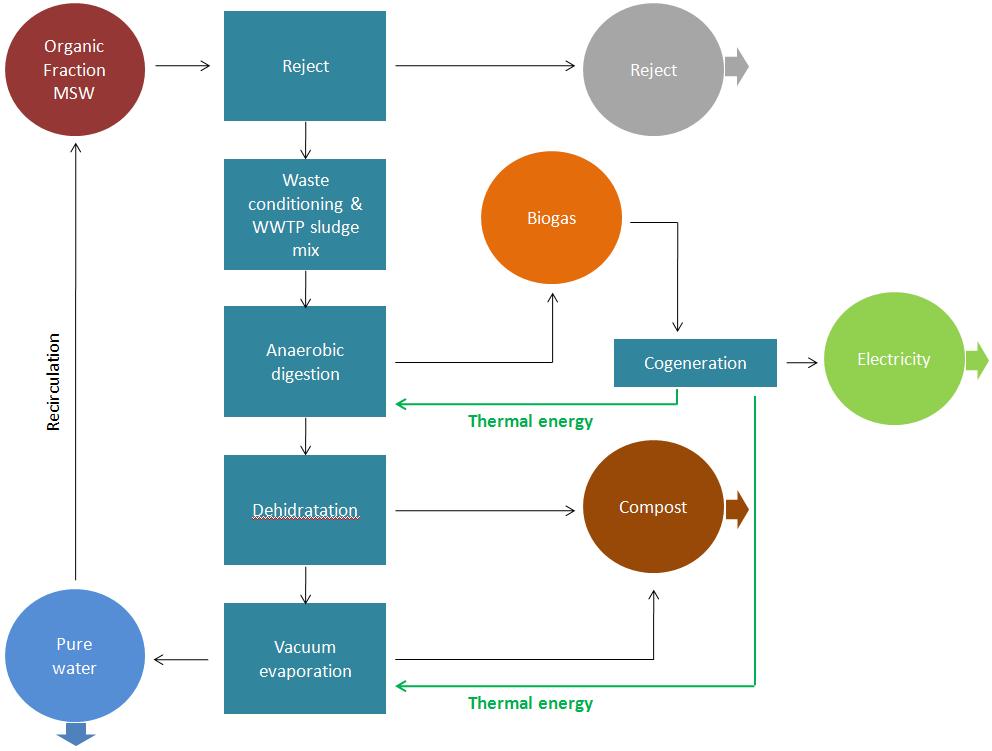