Condorchem Envitech designs and builds catalytic oxidation equipment and oxidation catalytic converters according to each specific application, and chooses precisely the most appropriate catalyst depending on the specificity of the emissions to be treated.

The main advantages of our catalytic oxidizers are:

Catalytic oxidation is a destructive technology for VOC purification that achieves combustion at lower temperatures than the thermal alternative, due to the catalyst in the combustion chamber and a heat exchanger to preheat the incoming air with the purified exhaust air.

A catalytic oxidizer is applicable for all processes liable to produce VOC emissions, which are numerous, and generally belonging to industrial sectors.

VOCs are all those organic compounds that exist in a gas or very volatile liquid state at ordinary room temperature. Formally VOCS are all those organic compounds that have a vapor pressure equal to or higher than 0.01 kPa or an equivalent volatility in the particular conditions of use at 20ºC. VOCs usually have less then twelve carbon atoms in their chain and contain other elements such as oxygen, fluoride, chlorine, bromine, sulphur or nitrogen.

There are more than one thousand different VOCs, but the most abundant in the air are methane, toluene, nbutane, i-pentane, ethane, benzene, n-pentane, propane and ethylene. These compounds are generated in all those industrial processes in which organic solvents (such as acetaldehyde, benzene, aniline, carbon tetrachloride, 1,1,1-trichloroethane, acetone, ethanol, etc.) are used.

Regarding their danger for human health and harmful effects on the environment, VOCs are classified in 3 groups:

Functioning/operation of a catalytic oxidizer

Catalytic oxidation works similarly to other thermal technologies (like nitrogen oxide catalytic converters or catalytic thermal oxidizers) for the treatment of Volatile Organic Compound emissions. The difference from other systems is that the gas is sent to the ceramic bed to produce the heat to be used for the oxidation directly after passing through the flame zone.

Catalytic oxidation destroys VOCs by converting them into CO2 and H2O in a catalytic oxidation reactor. The process is carried out in the presence of a catalyst in the combustion chamber, where the VOC is destroyed at a temperature in the range of 250-350°C, considerably lower than those used in regenerative thermal oxidation. However, the catalyst deactivates over time and must be replaced every 4-5 years, which adds to the operating cost.

The catalytic oxidation has a thermal efficiency greater than 98% and does not consume gas when the autothermal point is reached. It is an ideal technique for low or medium airflows (1,000-30,000 Nm3/h) for medium or low VOC concentration (0.1 a 10 g/Nm3), which has a low operating cost.

The catalysts used are usually noble metals (platinum, palladium, silver or gold, alloys with titanium, rhodium, osmium or iridium) supported on a ceramic base, or metal oxides (oxides of vanadium, chromium, manganese, iron, cobalt, nickel or copper, among others). Catalysts based on noble metals have a higher activity than catalysts of metal oxides, although they have a lower resistance to poisoning.

Metal oxide catalysts are used to oxidize gases containing chlorinated compounds. Platinum-based catalysts (like the used in the catalytic oxidation of ammonia) are active for the oxidation of VOCs containing sulfur, although they are rapidly deactivated in the presence of chlorine.

Catalytic oxidation of sulfur dioxide, methane, alkanes or carbon monoxide require different approaches depending on the source of the emissions. 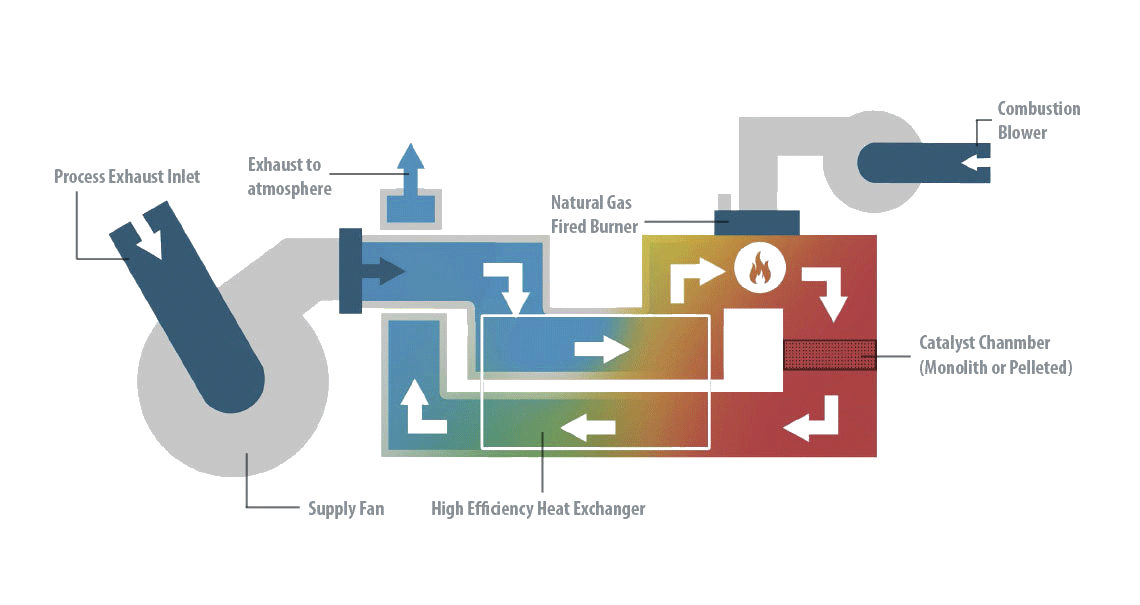