Many industries produce effluent with high potential pollutant loads. These effluents must be subjected to complex and costly processes before discharging them into the environment under suitable conditions in accordance with current legislation (e.g. Water Law). Also, the process usually produces significant quantities of waste that must be sent to specific landfills depending on their properties; resulting in high costs for equipment, management, reagents and the corresponding fees and taxes.

The treatment of segregated discharge provides a series of advantages over integrated treatment with the rest of the effluents. This is because, in many cases, the washes contain salts or remains of processes that can be reused or which can provide byproducts which can be used inside or outside the industry producing them.

This study considers the actual case of discharge produced by a paper company, which converts a significant part of this effluent into a product it uses itself and a by-product which is in demand on the market. Therefore, in addition to optimizing its processes, it is also closer to its aim of zero discharge.

Several discharges are produced by this company; among the most significant are: one that contains a residual amount (1-3%) of H2SO4, another rich (5%) in NH3 and another containing NaOH at a concentration of about 1%. There are also other circuit and process washes with a high organic content which are subjected to oxidation.

Meanwhile, this industry consumes (NH4)2SO4 and is located in an agricultural area that demands fertilizers. Several tests were done in the laboratory with the different factory effluents and, after separating those with the cleanest H2SO4, those containing NH3 and the most alkaline (rich in NaOH), a (NH4)2SO4 production system was projected and developed.

The first stage was to arrange a facility to make a viscous liquid product containing 2-3% by weight, after reacting the H2SO4 and NH3 in a tank.

The attached diagram shows the tanks required for the ammonia, acid and alkaline effluents. 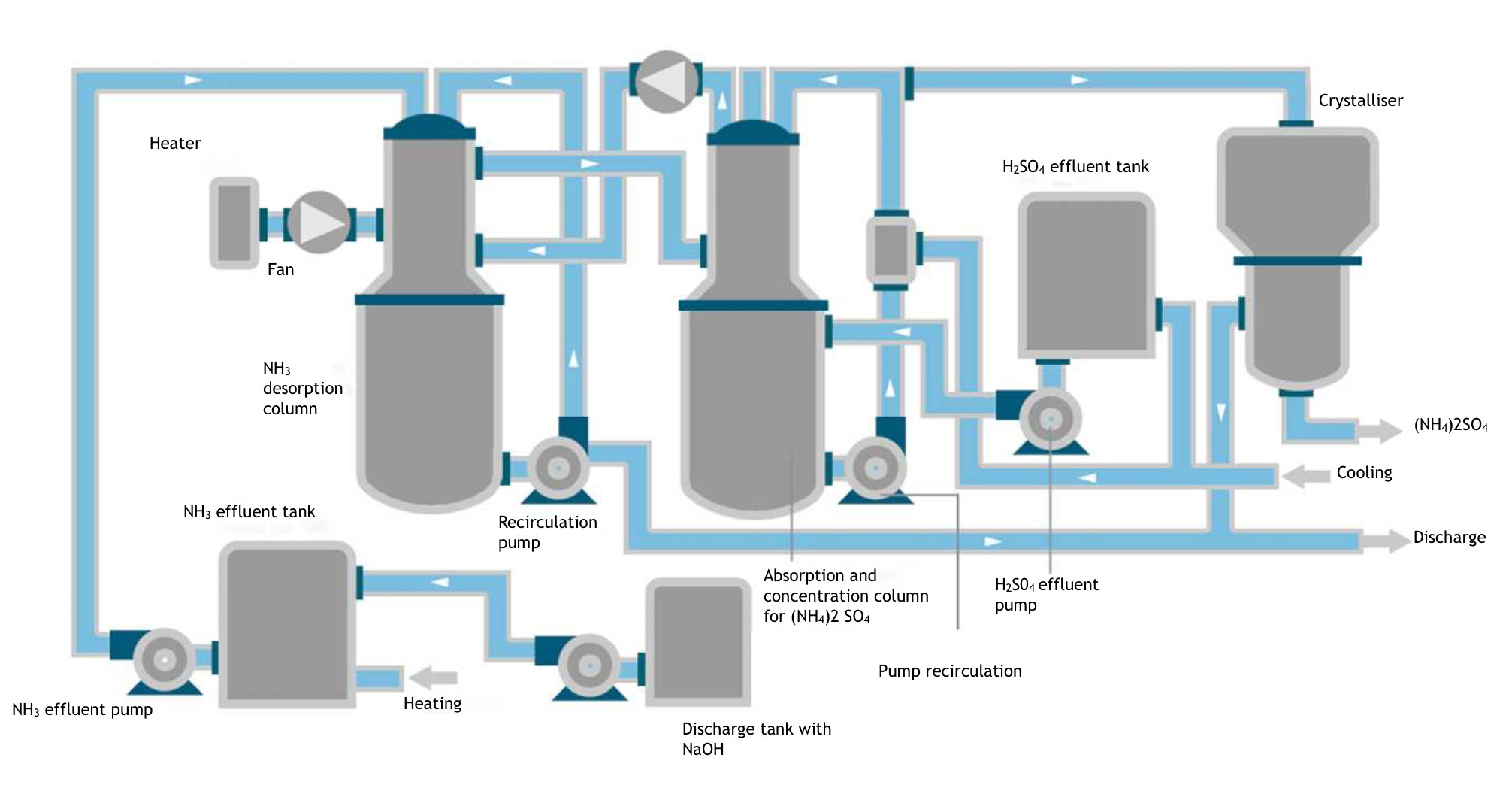 The alkaline discharge was pumped to the ammonia discharge tank and stirred until a pH of 12.5-13 was obtained, as measured by a pH meter. Inside the tank, the temperature was increased to about 40°C to facilitate desorption of the NH3. From here, it is pumped to a stripping tower that houses a high-surface fill, through which the ammonia solution circulates countercurrently, and a flow of air from an electric fan incorporating an electrical heater to facilitate the separation of the resulting NH3. The solution is recirculated with a pump to the upper area of the tower.

The NH3 is entrained by air from the upper part of the desorption column to the lower one of the attached absorption column, where the H2SO4 effluent is pumped from the acid effluent tank. To facilitate absorption, the liquid contained in the tank placed under the absorption tower is reduced to a temperature of about 5°C by a cooler. From this tank, the acidic solution is pumped to the upper part of the absorption tower where it recirculates in countercurrent with the gas rising through the fill contained in it.

The excess gas can be returned to the initial desorption tower with another electric fan for possible use of residual NH3. The remaining gas is released to the exterior after treatment through the appropriate filter.

The alkaline effluent from which most of the NH3 has been extracted is sent to the wastewater treatment plant.

The second stage is to obtain a more concentrated and marketable product by treatment in a crystallizer, where a good quality product is obtained.

Farther information about the process

The materials used must be corrosion and abrasion resistant. Columns of HDPE or GFRP are recommended with an inner vinyl ester film. The use of metal parts in the towers, pumps and, especially, the acid circuit must be avoided. The pumps should be the magnetic drive type and constructed in PP. The pump impeller tends to suffer abrasion wear. Stainless steel highly resistant to corrosion, such as 316L or 904L, was chosen for the crystallizer.

To prevent the crystallization of salts in the fill, the tank and the concentrated product circuits, they should be kept in recirculation when the equipment is not under operation.

The filling apparatus for the towers (particularly the absorption tower) must be easily removable for cleaning.

Fields of application for ammonium sulfate

(NH4)2SO4 is used directly in agriculture as an excellent “starting” or “base” fertilizer during planting. It can be used in all types of terrain and crops, in controlled release (immediate action and prolonged effect) and has good storage qualities. Because it is a fertilizer high in nitrogen and sulfur concentration, calcium slightly modifies the pH of the soil where it is added, so that calcium is the best used by the crop. Its fluidity and chemical stability are excellent, thus promoting the preparation of fertilizer formulas in physical mixtures and their mechanical manual application.

Nitrogen and phosphorus influence the growth and development of plant foliage, roots and stems as well as providing optimal development for microorganisms; and sulfur is part of the amino acids found in proteins.

Calcium influences the quality of the product and the resistance of fruits to damage by pests. Granular ammonium sulfate is not lost by leaching because of the absorption of the ammonium by soil colloids and its controlled breakdown.

In its pure state, it consists of white, diamond-shaped crystals (laminas and agglomerates), but in its commercial state, as fertilizer, it is slightly yellow due to arsenic sulfide (from coking plants).

Density: In the pure state it is 1.77, but agricultural ammonium sulfate has an apparent density without caking of 0.8 to 1.1.

Hygroscopicity: Typically for ammonium sulphate it is not very high, although it is critical for the atmospheric humidity to be less than 70%; however, it can increase if there is free sulfuric acid, which has a great affinity for water. Hygroscopicity index at 30ºC = 20.

These result from the action of a strong acid (sulfuric acid) on a weak base (ammonia). This explains why their solutions are partially hydrolyzed and are slightly acidic. For the same reason, on boiling, ammonia is released. Ammonium sulfate can form explosive mixtures with strong oxidants, such as chlorates.

At elevated temperature, NH3 is released. It decomposes easily with alkaline products at room temperature to produce ammonia.

Agricultural ammonium sulfate is commercially available in the form of: 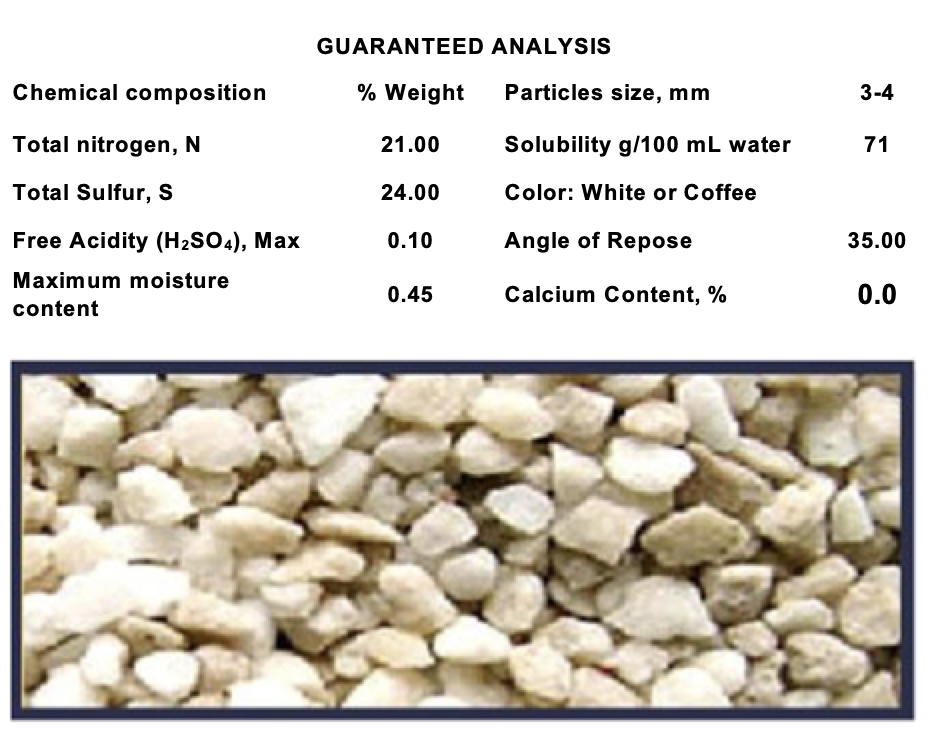 Although it seems a truism, there is no effluent better treated or less harmful to the environment than one that does not pour. In addition, in many cases, certain discharges can greatly affect the general effluent of the factory. Even if they represent a small volume, their concentration, toxicity or polluting load may be proportionally high compared to the rest of the effluents to be purified. In these cases, they should be segregated and treated separately or sent to a treatment center. In all cases, they should be reduced in volume to minimize transport costs or even removed with solid waste. This is achieved by mechanical means (e.g. press filters, centrifuges or band filters) or by low energy evaporation (e.g. vacuum evaporators or thermocompression). Although these processes are expensive, they usually provide a return in the medium term, as general purification of the factory may be simpler, and their installation and operation costs will also be lower while, most importantly, minimizing the risk of environmental contamination.

What could be a better solution than re-using these effluents? This significantly reduces the time for a return on the investment and operation. The case described in this article is a clear example of this.