Biological wastewater treatment (anaerobic and aerobic digestion reactors) takes advantage of the ability of certain microorganisms (including bacteria) to assimilate organic matter and nutrients dissolved in the water for their own growth, thus removing soluble components in the water. Soluble organic matter is assimilated by microorganisms as a carbon source. After this operation, the biomass produced from the supernatant is then separated by decantation. For microorganisms to grow, nitrogen and phosphorus are needed in the effluent as well as organic matter. If their concentration is not sufficient, they have to be added to the treatment.

The traditional application consists of removing biodegradable organic matter, both soluble and colloidal, and compounds containing nitrogen and phosphorus. It is one of the most common treatments for urban wastewater and most industrial water, due to its simplicity and low operating economic cost.

In most cases, the organic matter constitutes the energy and carbon source that the microorganisms need in order to grow. The presence of nutrients that contain the essential elements for growth is also necessary, especially the compounds N and P, and finally, in the case of an aerobic system, the presence of oxygen dissolved in the water. This final aspect is key when choosing the most suitable biological process.

The only requirements for the successful application of these technologies are that the contamination is biodegradable and that there are no biocidal compounds in the effluent to be treated. Microorganisms can assimilate organic matter either with or without the presence of oxygen.

In the bacterial metabolism, the electron acceptor element plays a fundamental role in the processes of oxidation of the organic matter. In addition, this aspect has an important impact on the application options of the water treatment. On the basis of said electron acceptor, three cases are distinguished:

The most suitable type of biological process is chosen after analyzing the features of the effluent to be treated on a case by case basis.

Aerobic wastewater treatment systems take advantage of the ability of microorganisms to grow by assimilating organic matter and nutrients (nitrogen and phosphorus) dissolved in the water in the presence of oxygen, which acts as an electron acceptor when oxidizing the organic matter.

This phenomenon leads to high energy yields and significant production of sludge, resulting from the high growth of bacteria under aerobic conditions. 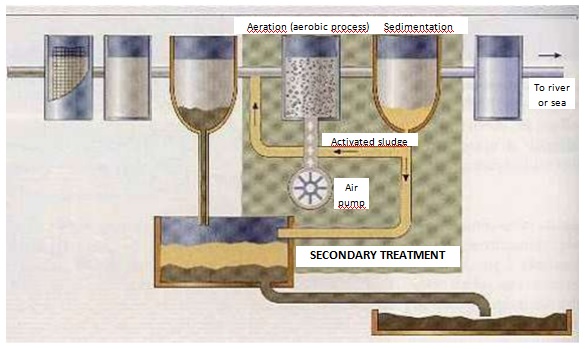 An aerobic treatment system consists of the following stages:

Large size solids arriving at the water treatment plant are first removed. If not disposed of effectively, these materials can lead to serious equipment failure. Stones, sand, tin cans, etc. cause significant wear on pipes as well as pumps.

Oils and fats are also removed at this stage to prevent the biological treatment from slowing down, as both the performance and the quality of the effluent decreases. Both physical and mechanical operations are used for this. The main operations used depend on the wastewater source, its quality and subsequent treatment:

At this stage, suspended solids are removed from the water using different physical and chemical processes. These solids can be sedimentable, floating or colloidal.

Aerobic processes are based on the elimination of organic pollutants by their transformation into bacterial biomass with the help of oxygen (which acts as an electron acceptor in the oxidation process), CO2 and H2O.

Depending on the quality of the effluent obtained, its final destination and relevant legislation, tertiary treatment may be applied to remove residual organic load and other pollutants not removed after the secondary treatment, such as nutrients, phosphorus and nitrogen. Any combination of treatment processes can be used, whether physical, chemical or biological. Generally, they are:

Which treatment is best for my case?

Depending on the system used for the growth of biomass, aerobic treatment systems are classified as follows:

2. Fixed biomass. The biomass grows attached to a natural or artificial support where it forms a layer or film.

Selecting the most convenient biomass in suspension or fixed biomass biological process is done after analyzing the effluent properties, type of industrial process producing it, the degree of purification required and the global needs of the user: 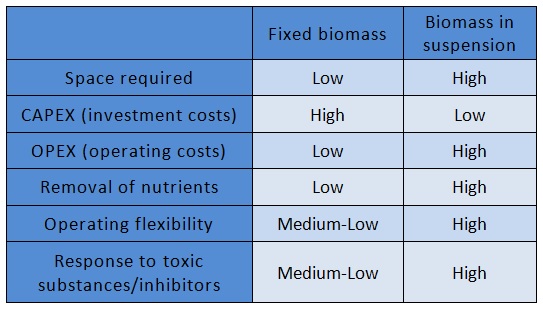 Which reactor is best suited for my case?

The following table shows which kind of process (aerobic or anaerobic) is preferred according to these criteria:

One of the biggest challenges of aerobic systems is the management of the sludge produced. The following diagram shows the general sludge management process, depending on the amount. 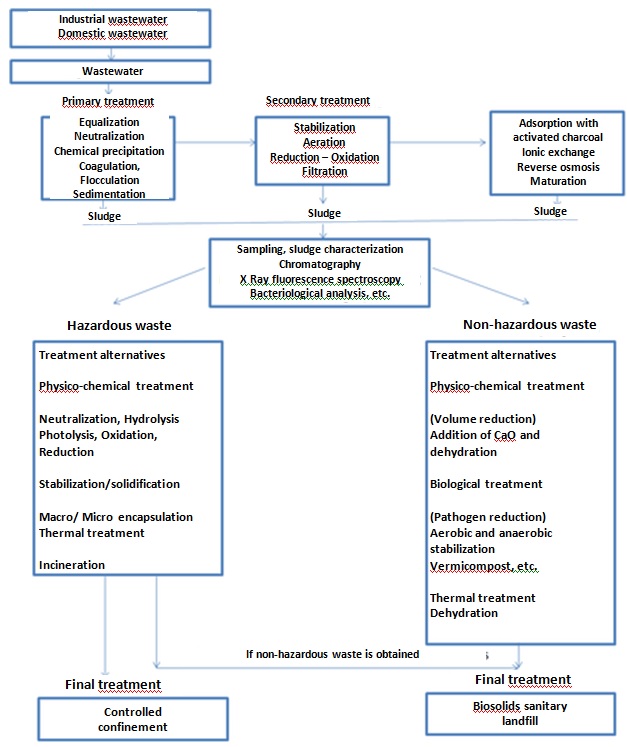 I need to treat my wastewater