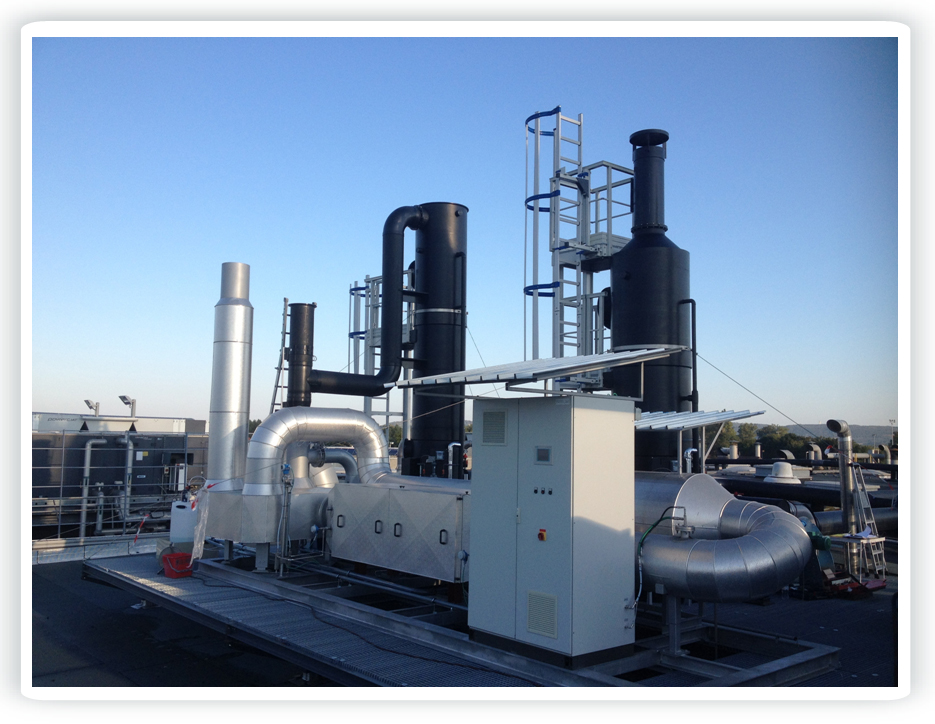 Atmospheric contamination represents a serious threat to health in most regions of the planet. According to an assessment of environmental contamination-related morbidity performed by the WHO, more than 7 million premature deaths can be attributed to the effects of urban contamination every year.

Moreover, this problem is not restricted to more developed countries, with more than half of these deaths occurring in the population of developing countries.

Although nitrogen oxides are not the only causes of atmospheric contamination, they are nevertheless some of the most important such contaminants. Nitrogen oxides are two different nitrogen-based gases: nitric oxide (NO) and nitrogen dioxide (NO2). The term NOX refers to the combination of these two gases due to their ease of mutual interconversion in the presence of oxygen. However, at a formal level, the general term nitrogen oxides covers the following compounds: NO, NO2, N2O2, N2O4, N2O, N2O3, N2O5 and NO3, the latter of which is unstable.

Although most NOX is produced naturally, an important fraction of NOX is due to anthropogenic processes, the most important artificial sources being transport (70%) and industry (25%). The industrial processes responsible for generating the largest quantities of NOX are those concerned with energy production, the burning of coal, oil, and natural gas, and electroplating and metal etching processes. NO and NO2 are formed in processes during which temperatures higher than 1200 ºC are reached in the presence of atmospheric nitrogen and oxygen.

As all nitrogen oxides are contaminants, their emission has a particularly important effect on the environment. The main effects for which they are responsible include:

As a result, it is essential, above all, to minimize their production and then to eliminate those nitrogen oxides whose generation cannot be prevented. The objective of minimizing their generation can be achieved following three different strategies:

However, as it is impossible to completely prevent the generation of nitrogen oxides, techniques that allow the NOx generated to be removed must be used to comply with the increasingly demanding legislation in this regard. The techniques most commonly used for this purpose are as follows:

The main drawback of this process is that corrosive and harmful chemicals must be used and a physical space is required to house the process. As the efficiencies achieved are not high, this technique is generally only recommended for low NOX loadings.

This technique allows nitrogen oxide emissions to be reduced by converting them into nitrogen gas via a non-catalytic chemical reaction. In order for this conversion to take place in the absence of a catalyst, the temperature must be increased to between 850 and 1100 ºC. The operating temperature depends directly on the reducing agent used, with ammonia and urea being the most common.

This technique tends to be used in small industrial furnaces as the costs of working in this temperature range increase markedly for larger installations. The SNCR equipment does not require much room and is easy to install and operate. However, the reduction efficiency achieved is only moderate, thus meaning that this technique is valid for those cases in which nitrogen oxide emissions are low.

This technique is based on a catalytic process in which nitrogen oxides are selectively reduced in the presence of a catalyst while the reducing agent (ammonia or urea) is oxidized to nitrogen gas. The fact that the reaction occurs on the surface of a catalyst means that the temperature required is in the range 250-450 ºC. However, the final operating temperature depends on various factors, with the catalyst used being one of the key parameters.

The choice of catalyst is key to the process as this affects key parameters such as the operating temperature and extent of reaction. Four different materials are used as catalysts:

The choice of catalyst also directly affects operating costs as not all of them have the same properties, cost, and working life.

The main advantages of SCR technology are the NOX elimination yield, which is very high, and the fact that NOX is transformed into nitrogen gas without any additional byproducts or residues.

The main differences between the NOX elimination techniques described above are summarized in the following table.

In summary, nitrogen oxide emission must be controlled as they are strictly regulated by current legislation. The first step in this control is to minimize the production of these gases. Subsequently, production that cannot be prevented must be correctly treated prior to release into the atmosphere with the other gases. The most efficient technique for eliminating NOX is reduction via a selective catalytic chemical reaction (SCR). 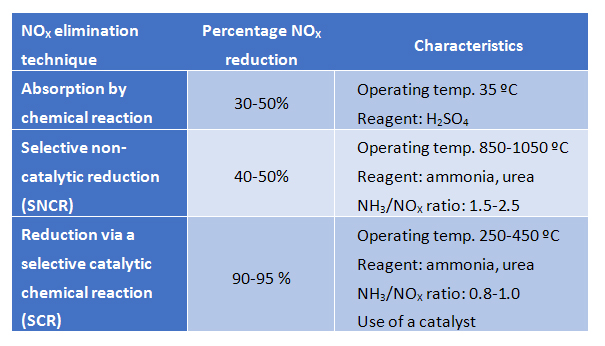