This decommissioning process involves a series of specialized industrial operations which are a business opportunity for companies specializing in industrial waste treatment.

It must be borne in mind that regardless of the waste and facilities that have a high radioactive load (high level and activated elements waste), there will be another part with elements suitable for entering industrial circuits such as the boric acid in auxiliary systems.

A problem derived from the radiological characterization of candidate materials for declassification is the difficulty of measuring radionuclide concentrations for very low activity levels, which is leading the development of extremely sensitive measurement systems.

The type of decommissioning strategy has an influence on the volume and type of waste generated, as well as on the time for managing it.

Leaving aside high-level waste that mainly comes from spent fuel, due to its specificity and importance, the following levels of closure can be considered: 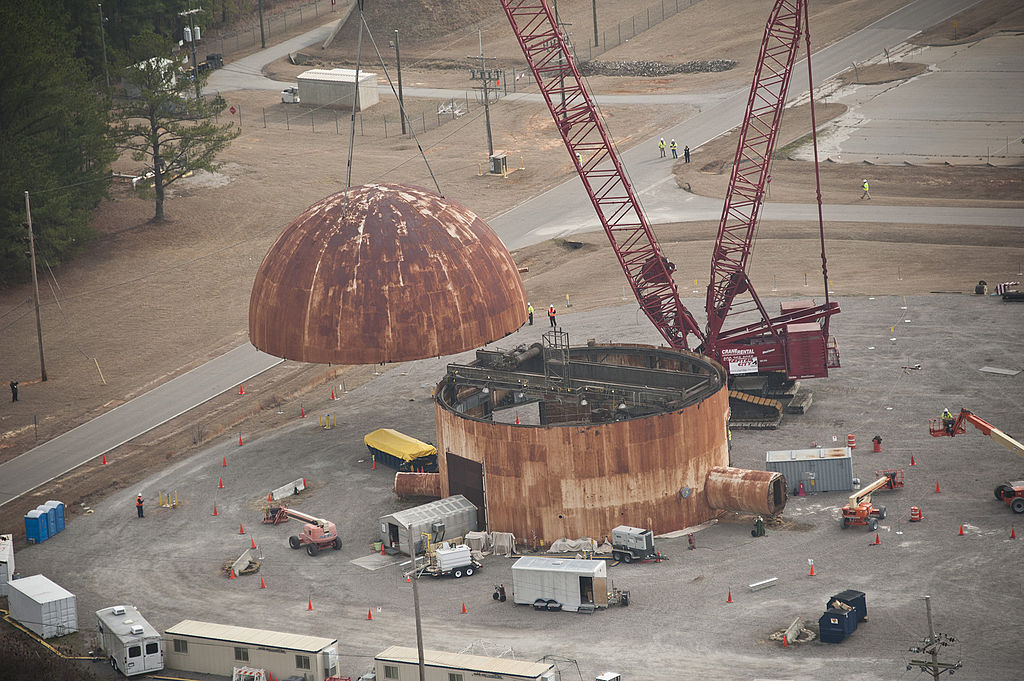 The process of decommissioning a nuclear power plant that has completed its operational life cycle is divided into three stages:

Closing process under the supervision of the installation, discharging the fuel and evacuating it from the fuel plant and the radioactive waste from the operation (mothballing).

The irradiated fuel elements, control rods and activated liquid effluents are removed. The physical barrier of the primary circuit is maintained as a protective element.

The parts with the highest levels of radiation are in the area of the reactor core. This building is maintained under radiological protection control, and the access process is carried out under dosimetry control.

Discharging the fuel is the first task to be done once the plant has finally stopped. Although it is not in fact a dismantling activity, it often conditions it, as it depends on if there are facilities for fuel reprocessing or storage.

If such facilities do not exist, they may need to be stored in the power station pools or in another facility created for this purpose (individual warehouses); this can greatly affect decommissioning. Valves, connection points and joints, for example, are sealed.

One of the fundamental aspects in this stage 1 is performing a radioactive inventory. Knowing the quantitative inventory and the type of radionuclides in the facility at the time of decommissioning is essential to its planning, for aspects such as:

A radioactive inventory of the plant once the fuel is withdrawn is divided into two categories:

These are the main constituents of activated corrosion products. In concrete, the most important radioisotopes are Eu-152 and Eu-154 (half-lives of 13 and 8.8 years).

C-14 is a long-lived radioisotope (5,700-years), but the beta radiation it emits is low-energy so does not constitute a risk of irradiation, although it must be considered for the storage of waste.

Available studies indicate that the total residual activity due to the activation of components and reactor structures is much higher than the contamination deposited in the systems, equipment and buildings outside the reactor.

The first quantity can reach a value of 2,1017 Bq for a light water plant of 1,100 MWe immediately after stopping, while the surface contamination can range between 1011 and 1014 Bq. The risk from ɣ radiation and contamination from radionuclides incorporated in the body is one of the main concerns.

The half-life of the different isotopes in this process must be considered to understand that in certain cases (isotopes of half-life), these elements will no longer be a radiological problem.

For example, the activity of Co-60 is reduced to one thousandth in 50 years. Taking into account energy from gamma radiation emitted by Co-60, the presence of significant activities for this isotope, responsible in large part for exposure doses, can significantly limit the access of people to certain areas of the facility and significantly increase the volume of waste generated during the dismantling operation.

After 50 years, the activity of long-life isotopes, such as Ni-63 and Nb-94, begins to predominate, decreasing the radioactive inventory, very slowly, and further delaying decommissioning has few advantages from the point of view of radiological protection. Stage 1 is characterized by a specific inspection program.

The containment building may be buried or not; the site is available to be used with restrictions (entombing).

The physical barrier that constitutes the primary circuit is reduced to its minimum size. The most easily removable parts are removed gradually and under radiological control and the seals controlled.

If necessary, a biological protection barrier is interposed. After a radiological study, the containment building can be partially removed, and the non-active materials reused. The liberated areas are decontaminated. Surveillance decreases but periodic checks are carried out.

Decommissioning is complete with demolition of the structures, restoring use without restrictions to the site (or dismantling).

It is characterized by the withdrawal of components that are still in the area of the plant and that have high values, with respect to the natural background radiation. The radiation levels present must be authorized.

The area must be left for the free use of other industrial activities.

I need to treat the waste of a decommissioned plant

Get in touch with us and one of our experts in waste treatment of nuclear power plants will attend your inquiry in a personalized way.

At the legal level, activity limits are established for contaminated materials, without a future use, to be no longer considered as radioactive waste, and they can be managed according to the regulations that apply to them.

This is controlled by Royal Decree 783/2001, July 6, which approves the Regulation on health protection against ionizing radiation; establishes the rules in terms of radioactive waste storage; the evacuation of effluents and solid waste to the environment (with express authorization only); and establishes the sanctioning regime for non-observance. Among the latter are those for not having adequate systems for storage, treatment and evacuation of effluent and solid waste, where appropriate, or their evacuation without authorization or at levels exceeding that authorized for emission.

Royal Decree 1349/2003, October 31, on the management and financing of ENRESA, includes all previous legislation that existed in this respect into a single norm, while repealing all or part of this. This again establishes the following tasks, among others, as the responsibility of ENRESA:

In addition to the previous references, although it is not a regulatory standard, there is the “Protocol on Collaboration in the radiological monitoring of metallic materials”, of November 1999, which is of extreme importance, due to it regulating facilities and activities potentially generating radioactive waste in non-negligible volumes, in case of incidents.

The basic management principle consists of the establishment of activity levels to classify decommissioned materials into distinct groups, which are each subject to a specific management system.

One of the main aspects in decommissioning nuclear power plants is managing the large volume of waste generated. Due to the peculiarities of the different buildings that make up a Nuclear Power Plant environment, a great variety of materials are produced during decommissioning that can be used later.

The volume of waste to be treated and stored decreases as the time since the end of the operation increases. Therefore, it may be convenient to delay certain decommissioning stages due to the interest in reducing the volume of radioactive waste generated.

According to radiological protection criteria, materials that originate in a decommissioning process are divided into different levels of activity. These activity levels must be authorized by the Regulatory Body and lead to the categorization of the materials in the following groups:

Conventional materials, with an activity below the authorized threshold

First, the activity of the different elements is determined and they are characterized and segregated and, if necessary, decontaminated.

Once the process has been carried out, the new activity value is compared with the threshold value.

If the values are in accordance with the radiological requirements, they are declassified and the waste is managed by conventional methods (free use or authorized destinations).

Radioactive waste constituted by the rest of contaminated materials

Once characterized as high, low or medium activity waste, it will be segregated and treated specifically. Solid waste resulting from the treatment of liquid and gaseous effluents originated by the dismantling and decontamination operations will be characterized and made inert or placed in an individual location.

Radioactive waste is subjected to the following processes: radiological characterization, segregation and storage (temporary), treatment and packaging according to its nature and in accordance with the acceptance requirements of the Transportation and Evacuation Center in the Storage Center.

Radioactive effluent (liquid and gaseous) produced during decommissioning is subject to preliminary treatment, according to its nature (e.g. filtration or ion exchange), prior to its controlled discharge, with the limits and controls authorized for each Facility being applicable.

The Table below gives examples of estimates of the volume of Low and Medium level waste generated for various types of reactors, both during decommissioning and normal operation.

It is estimated that 50% of the total metallic scrap resulting from decommissioning (Level 3) of a 1,000 MWe plant is potentially reusable.

Also, of the 180,000 tons of concrete that would result, about 13,500 tons would be potentially contaminated and 4,700 tons potentially active.

At present, there are two decommissioning limit philosophies, between which different average terms can be adopted.

The dismantling and decommissioning of a nuclear power plant represent significant costs and benefits to society (e.g. release of the site and removal of the inherent potential risks) which are difficult to quantify, unless they are valued as scarce goods when there is an urgent need for them.

On the one hand, is the philosophy that applies in the United Kingdom. Here, the decommissioning process begins with a level 1 closure lasting 30 years, after which level 2 starts when the remaining plant structures are entombed.

This latency status is maintained for 100 years before undertaking Level 3 decommissioning some 130 years after the plant has stopped.

This way of dealing with the problem spreads the problem over time and decreases the radiological load that operators suffer during the decommissioning process, due the natural property of radioactive decay.

Practically manual techniques are used. The financial provisions of the stop date will be small if a positive real interest rate is maintained.

As a disadvantage, it can be quickly deduced that the site is occupied for a long time; the management and final storage of waste is non-existent and that the risks inherent in the installation, although small, will remain throughout the latency period, as well as it having a potential environmental impact.

I need to treat the waste of a decommissioned plant

Get in touch with us and one of our experts in waste treatment of nuclear power plants will attend your inquiry in a personalized way.