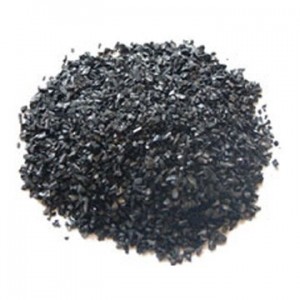 The process of adsorption consists of the capture of soluble substances on the surface of a solid. A fundamental parameter for this is the specific surface of the solid, as the soluble compound to be eliminated must be concentrated on its surface. The need for improved water quality means that this treatment is booming. It is considered to be a refining treatment, and as such, is applied at the end of the most common treatment systems, especially after a biological treatment.

The solid that is used universally in the treatment of water is activated carbon, although in recent years, various solid materials have been developed that improve the properties of activated carbon in certain applications.

There are two traditional ways of using activated carbon, with different properties and using it in different applications:
Granular activated carbon (GAC). A column is normally used as a means of contact between the water to be treated and the activated carbon, whereby the water enters through the lower part and ascends to the top part. In this case, the particulate size is bigger than in the other. It is normally used to eliminate trace elements, especially organic trace elements, that may be present in the water and that have usually resisted a biological treatment. Despite their low concentration, these elements often give the water a bad smell, color or taste.

Powdered activated carbon (PAC). This type of carbon is normally used in biological processes, when the water contains organic elements that may be toxic. It is also usually added to the water to be treated, and after a certain amount of contact time has passed, normally with agitation, the particles are left to sediment for their pre-separation. These operations are usually carried out intermittently.

The economic viability of this process depends on the existence of an efficient means of regeneration of the solid once its capacity for adsorption is finished. The GAC regenerates easily via oxidation of the organic matter and subsequent elimination of the surface of the solid in an oven. The properties of the activated carbon deteriorate, which is why it is necessary to replenish part of it with virgin carbon in each cycle. On the other hand, it is more difficult to regenerate PAC, but it is also easier to produce.

Cost is an important factor when choosing the adsorbent. Alternatives to activated carbon are zeolites, clays (montmorillonite, sepiolite, bentonite, etc.), the so-called low-cost adsorbents, coming in large part from solid organic residues. Recently, derivatives of polysaccharides (biopolymers derived from starch) have been developed.

There is a wide range of applications for adsorption, from a wide range of organic substances (colorants, phenol, mercaptans, etc.) to heavy metals in all stages of oxidation.